Word of the Week: Taphephobia 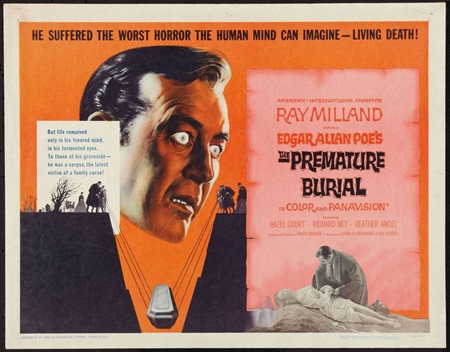 The OED has no entry for any of the spellings of this curious word; other sources, including Collins Dictionary and Webster’s Third International, provide brief definitions but no date of first usage. I first encountered it in At Home: A Short History of Private Life, Bill Bryson’s chatty and informative 2010 chronicle of domesticity through the millennia. Taphephobia comes up in Chapter XV: The Bedroom, amid a long section on death (causes of, customs surrounding, etc.).

Taphephobia was coined sometime in the mid-19th century, Bryson avers with some confidence. The Victorians had “some peculiar anxieties about death”:

Catalepsy, a condition of paralysis in which the victim seemed dead while actually being fully conscious, became the dread disease of the day. Newspapers and popular magazines abounded with stories of people who suffered from its immobilizing effects. One well-known case was that of Eleanor Markham of upstate New York who was about to be buried in July 1894 when anxious noises were heard coming from her coffin. The lid was lifted and Miss Markham cried out, “My God, you are burying me alive!” …

For at least a generation such stories became routine in even serious periodicals. So many people became morbidly obsessed with the fear of being interred before their time that a word was coined for it: taphephobia. The novelist Wilkie Collins placed on his bedside table each night a letter bearing standing instructions of the tests he wished carried out to ensure that really had died in his sleep if he was found in a seemingly corpse-like state. Others directed that their heads be cut off or their hearts removed before burial, to put the matter comfortably (if that is the right word) beyond doubt.

Nor is taphephobia itself dead and buried. Here, in its entirety, is an item published in ArtVoice in January 2009 :

Freud [!] de Melo, 73, operates a quirky tourist park in central Brazil that features stone models of Noah’s Ark and other sculptures, but he also notoriously suffers from taphephobia, the fear of being buried alive, and one of his sculptures is his own elaborate, fear-assuaging crypt. His vault houses a TV and fruit pantry, has access to fresh air, and features two built-in plastic cones that act as megaphones to the outside, reassuring de Melo that if he is buried too soon, he will be able to protest (as he demonstrated for a Wall Street Journal reporter, for an October dispatch, screaming into the countryside, “Help me! Come quick! I’ve been buried alive!”). (Taphephobia was more common in centuries past, afflicting George Washington among others, because doctors often missed lingering signs of life in sick patients.)

According to IMDb, there was a 2006 movie called Taphephobia (synopsis: “A man wakes up buried in a coffin, alone with the light from a cell phone”), possibly never released. And mark your calendars:: Taphaphobia, an episode of the web series “In Fear Of,” is scheduled to air, appropriately enough, on October 31, 2014.

This occupies a relatively low position on my Big List O' Fears, but I can't deny that it's there.

But of course phobia < Greek φόβος.