« Name in the News: Charlotte's Web | Main | How Cortana Got Its Name »

Word of the Week: Ammosexual

Ammosexual: A person who exhibits an extreme love of firearms, possibly to the point of fetishization. Coined from ammunition and sexual, with sonic overtones of homosexual.

On June 6, 2014, Bill Maher, comedian and host of the late-night talk show “Real Time,” derided proponents of “open carry” laws that would permit guns to be taken into all public spaces, including restaurants and places of worship.

Daily Kos has the transcript, which reads in part:

Guns aren’t just a tool of last resort. They’re awesome. That’s why people stroke them.  And name them, and take pictures with them. You guys aren’t just firearm enthusiasts — you’re ammosexuals. (audience laughter and applause)

And before you try and deny you have some sort of unnatural romantic relationship with your gun, consider this. You’re taking it out to dinner! (hysterical audience laughter) Because it completes you. Get a room.

Maher did not coin the term, which had appeared a couple of weeks earlier in an Americans Against the Tea Party post headlined “Meet the Dangerous Ammosexuals and Gun-Fetishists That Invaded Chipotle with Their Blessing.” (“Their” apparently refers to Chipotle management.)

A search of #ammosexual on Twitter reveals even earlier appearances, including one dated April 25. There’s an even earlier tweet from July 2012:

OK, I get it gun nut...you love hunting, and the deer population is out of control. Now, could you explain your erection? #ammosexual

And Urban Dictionary has an entry dated October 21, 2009, that doesn’t use “gun” or “ammunition” but seems to making a similar point.

My informal audit shows that “ammosexual” is usually a term of contempt. But as with gundamentalist, which has similar origins but with religious rather than sexual overtones, ammosexual has been appropriated by some of the people it’s meant to shame.

Here, for example, is a tweet from “Gun Rights Across America” that also appropriates “pride” as used by LGBT-rights organizations:

Proud to be an #Ammosexualpic.twitter.com/sRfbXDzNiZ

In fact, some professed ammosexuals have taken an “oppressed minority” stance. This decal is sold by an organization called Cold Dead Hands (a reference to Charlton Heston’s famous rallying cry): 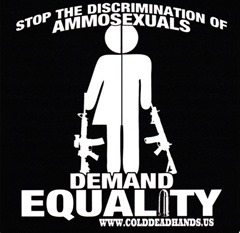 We’ve all heard the phrase by now... Ammosexual! I’m here to say: “I’m out of the closet! I am an Ammosexual, and I’m proud!” It’s time the liberal gun grabbers start recognizing our rights as law abiding gun owners, and quit discriminating against us. Stand united... stand proud... and post a decal that tells them how you feel.

For a possibly unwitting display of ammosexualism, see My Parents Open Carry, by Brian Jeffs, “a wholesome family book that reflects the views of the majority of the American people.” (Gun advocates are able to view themselves as both the majority and the minority.) The father in the story is named Richard Strong (nickname Dick?). Alexandra Petri’s sardonic review in the Washington Post is excerpted unironically on Amazon; here it is in context:

Thank heavens! I frequently lament how closeted gun owners are, and how I seldom hear from them. “You know who I wish we got to listen to more often?” everyone whispers and murmurs. “Gun rights advocates. Especially I wish they addressed the kids more.”

The Amazon customer reviews of the book are … well, on target. Many of the recent ones refer to the fatal shooting last week of am Arizona gun-range instructor by the 9-year-old he was teaching to fire an Uzi.

Posted at 06:58 AM in Government, Guns, Neologisms, Portmanteaus, Word of the Week | Permalink