« On the Visual Thesaurus: New Names from (Very) Old Words | Main | Name in the Wild: Tria »

2. For this year’s “new generation” Aygo, Toyota wants you to “Go Fun Yourself.” (Hat tip: Dan Clayton in Essex, UK.)

It’s a double whammy, folks! Numero uno, another candidate in the Near-Profanity Sweepstakes, F-word division. It’s a category already overpopulated with entries like Fresh ’n’ Easy’s “It’s about time life was this f’n easy” and Booking.com’s “Look at the booking view!” (For more, see my post from June 2013.)

The Italians must think the slogan is untranslatable. 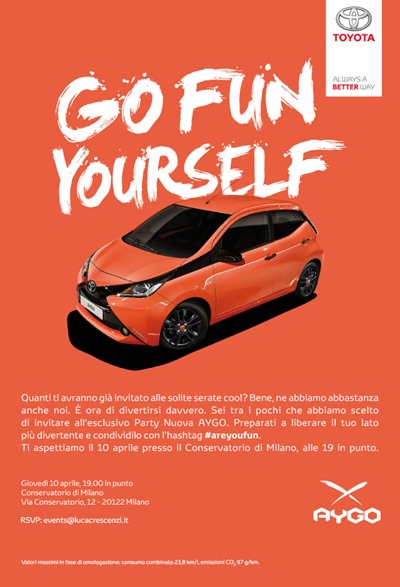 But the French? Mais non. 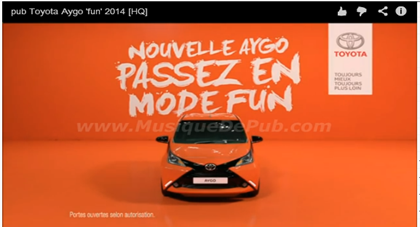 As for English-speakers, in case you didn’t quite grok the quasi-vulgarity, Toyota and Saatchi drive it home, so to speak, with “For fun’s sake.”

Inspired by a popular acronym and hashtag, #FFS.

You may recall that Toyota isn’t the first mass brand to hop on the F train. Last year Jell-O verbed funin a boundary-pushing campaign called “Fun My Life.” The #FML hashtag made it clear that Jell-O knew exactly which boundaries it was pushing. Bye-bye, Bill Cosby. 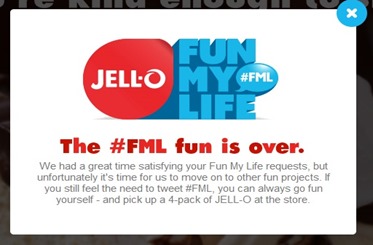 Despite the boggling number of Urban Dictionary upvotes, FML does not mean “Fix My Lighthouse.”

What else can we say about Toyota’s creative effort? Well, the copy avers that “The spirit of playfulness is alive in this small car.” The spirit of punctuation, however, is on its last wobbly legs.

When Agency Spy reported on the campaign in June, one commenter was unamused:

The idiocy of this slogan truly boggles the mind! I’m an avid user of the longer F word in the right context, but Toyota has shot itself in the foot with this one...not funny, not clever, won’t sell cars.

Go Fun Yourself? What? How? Where? With whom?

There is no fun in this car. I know, I checked – under the bonnet, under the seats, in the glove box and for three days.

I wonder if they're thinking of fun in the fun-sized sense (which really isn't any fun at all). Maybe they should have told their marketers, and not prospective clients, to go fun themselves.

I'm actually offended - not by the almost swears but by the breathtaking arrogance of the campaign and the steady destruction of the English language.

I'd like to see a return campaign of potential Toyota customers going to showrooms, discussing prices and part-exchanges, perhaps even taking a test drive before cheerfully telling the salesperson to 'Go Fun Yourself' and walking out. Turn the tables on this guff.

In Italy, for the past year or so Suzuki has been promoting its own city car, Swift, under the slogan FUN.COOL. and the subline un'auto così non la presto a nessuno ("I won't let anyone borrow such a car"). To Italian ears, fun cool sounds just like fancul(o)", i.e. "f*ck off". I find it in poor taste but it might be appealing to a market segment with limited English knowledge – the ability to understand the multilingual pun is probably gratifying to potential buyers. http://auto.suzuki.it/swift/

I noticed the word cool also in the Aygo ad, which makes me wonder if the similary in Toyota's and Suzuki's lexical choices for the Italian market is just a coincidence.