Leafly, which calls itself “the world’s largest cannabis information resource”—and which Business Insider has called “Yelp for weed”—took out a full-page ad in Sunday’s New York Times to congratulate New York State for passing the Compassionate Care Act, which legalizes the medical use of marijuana. The ad ran on Page 19 of the main news section. 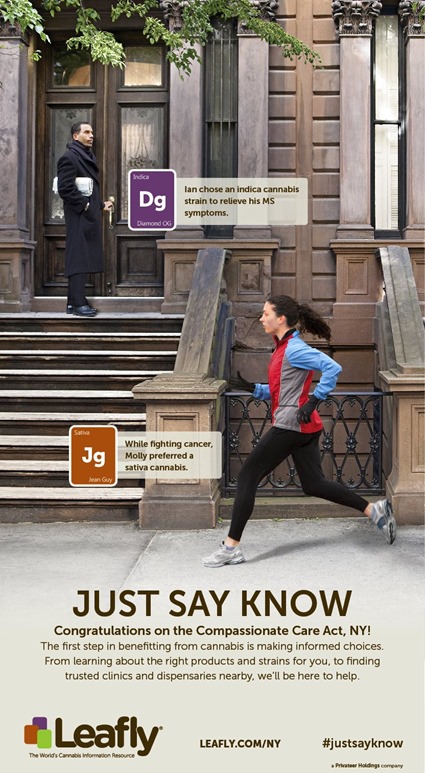 The Times ad, via Leafly.

A version of the ad also appeared on the Times website. Someone with a puckish sense of humor placed it adjacent to media reporter David Carr’s Monday column. 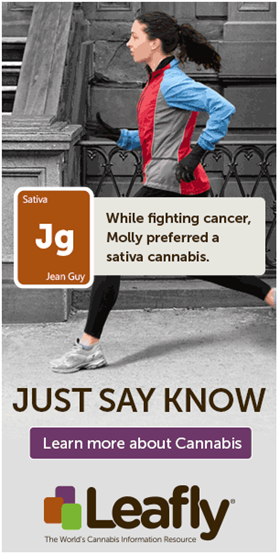 Carr, in case you didn’t know, published a memoir in 2010 about his drug-and-booze-plagued youth and adulthood. Here’s a bit of the book review that ran in the Times:

Back in the 1980s, when he was a reporter for an alternative weekly in Minneapolis and later for a local business monthly, Carr had a cocaine problem that spiraled downward from snorting to smoking to injecting. He also drank too much, did some low-level dealing and was arrested innumerable times.

Of course, the ad placement could be a coincidence.

The Leafly ad works on several levels. It depicts smartly attired, purposeful-seeming young adults who, we’re told, have fought serious illnesses.  (Marijuana: It’s not just for stoners!) It strikes a serious, science-y tone with those faux periodic-table abbreviations for cannabis strains. (The tamer ones, to be sure. You’ll have to visit the Leafly website to read up on Matanuska Thunder Fuck, Jack the Ripper, or AK-48.)

And it puns effectively on “Just Say No,” the much-trumpeted (and mocked) slogan—inspired by a comment by Nancy Reagan, wife of the president—of the U.S. War on Drugs* campaign of the 1980s and 1990s. Mrs. Reagan saying no with a smile. Via The College of William & Mary, “Mainstream Drug Use in America.”

“Just Say Know” is appropriate to Leafly’s “knowledge is power” brand. Here’s an excerpt from the company’s press release about the Times ad:

We want to help New York patients learn about cannabis and make responsible and informed consumer choices about the product best suited for their medical conditions. Patients need a reliable, mainstream information portal about cannabis that is free of classic stoner stereotypes, and we truly believe that Leafly is the resource for them.

Finally, I would be remiss not to mention the Leafly name, one of the dozens and dozens of Names That End in -ly—apps, startup companies, news organizations, and more—that are so very popular at the moment. It’s a name that blends into the brand landscape so predictably, so boringly, that you’re hardly aware that it represents a substance that will still get you prison time in a majority of jurisdictions. (To date, only 23 states and the District of Columbia have legalized some form of marijuana commerce.)

Indeed, almost everything about the ad and the company speaks in reassuring tones and mainstream tropes. The only suggestion of rule-breaking—and it’s a faint one—appears in the tiny type under the #justsayknow hashtag: “A Privateer Holdings company.” Privateer—“a private equity firm shaping the future of the legal cannabis industry”—takes its name from a seventeenth-century term for an armed, privately owned vessel commissioned for war service by a government.

In short, the ad seems to be signaling a new era in legal, mainstream marijuana marketing.

Here’s what Jesse Walker wrote about the ad in the libertarian publication Reason:

The most striking thing about the ad is that it isn’t striking at all. It would be easy to flip past this quickly without recognizing that it's about cannabis—and even if you do pause long enough to see what's being advertised, the idea of an ad for a marijuana review site in The New York Times just doesn't sound all that bizarre anymore. That’s when you know a social revolution is succeeding: when it starts to feel banal.

* Or, as some of us prefer to call it, the War on Some Drugs.

"War on Some Drugs." Good name for it.