« Word of the Week: Snowden Effect | Main | Name in the News: Charlotte's Web »

The heroic drumroll continues in the world of commerce! Some recent sightings:

Delivery Hero, a Berlin-based food-delivery service that operates in 23 countries, was in the news earlier this month when it announced its acquisition of German rival Pizza.de. Delivery Hero was founded in 2011. 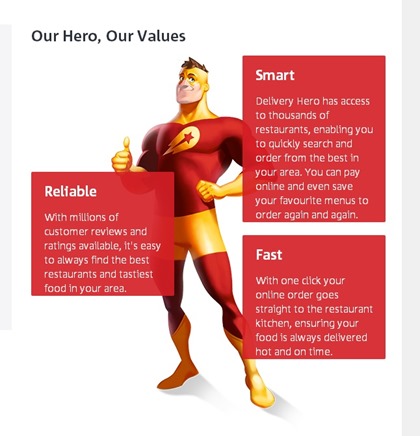 “Our Hero, Our Values.” Image from DeliveryHero.com. All web content is in English.

Last week San Francisco-based ModCloth (“democratizing fashion one indie, vintage, and retro-inspired style at a time!”1) became the first retailer to sign the Heroes [sic] Pledge for Advertisers, a promise not to digitally alter images of models. The pledge was created by the Brave Girls Alliance, which wants to give families “multi-layered, diverse, intelligent, and strong media characters to enrich their girls [sic] imaginations.” (I’m not sure what Brave Girls Alliance has against possessive apostrophes. And while abstaining from Photoshop is rare in fashion photography, I doubt that actual heroics are involved.)

AdFreak is rather fond of “hero” itself. 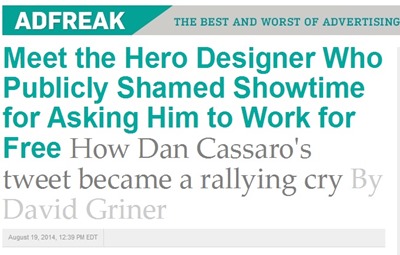 Dan Cassaro told Showtime: “It is with great sadness that I must decline your enticing offer to work for free,” and then he shared the sentiment on Twitter.

Principled? OK. Clever? Sure. Heroic? Not in my book.

“MX” is an abbreviation for “mail exchanger,”2 which Wikipedia defines thus:

a type of resource record in the Domain Name System that specifies a mail server responsible for accepting email messages on behalf of a recipient's domain, and a preference value used to prioritize mail delivery if multiple mail servers are available. The set of MX records of a domain name specifies how email should be routed with the Simple Mail Transfer Protocol (SMTP).

As I’ve written elsewhere—see my September 2013 Visual Thesaurus column—“hero” names have proliferated since the attacks of September 11, 2011, when the need to identify and praise people in rescuer roles became acute.3 See also my blog follow-ups in October 2013, early March 2014, and late March 2014.

1 For more “One X at a Time” slogans, see this, this, and this, for starters.

2 MX is an abbreviation for other words, too, including motocross (the sport) and Mexico (the Internet country code). My favorite Mx—brand new to me—stands for Mixter, “an uncommonly used English honorific for genderqueer. It is a gender neutral title used by few people and its use has yet to be made official in general, although Brighton and Hove city council in Sussex, England, voted in 2013 to allow its use on council forms.” (Source: Wikipedia)

3 Of course, there’s always the strong possibility of a less-elevated rationale:

Via TechCrunch, transforming nerds into heroes since 2005.

Posted at 06:00 AM in Advertising, Hero, Naming, Slogans and Taglines, Technology, Trends | Permalink