Word of the Week: Manosphere

Manosphere: A loose network of blogs, forums and online communities on the English-speaking web that are devoted to men’s interests, often in opposition to feminism.

Although there were earlier men’s-interests blogs, Know Your Meme tracks the earliest usage of “manosphere” to the November 1, 2009, debut of The Manosphere. That blog fizzled out a month and a half later, but other sites picked up the mantle, including Viva La [sic] Manosphere and Manosphere.com, “the first 24/7 manosphere blog wire.” Manosphere has compiled a list of more than 100 manosphere blogs. 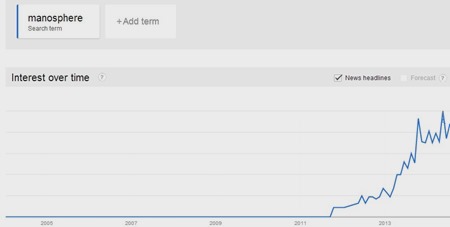 The manosphere has its attendant jargon: there are men’s rights activists (MRA), pick-up artists (PUA), and Men Going Their Own Way (MGTOW, a male-separatist movement). The Red Pill (TRP, a reference to the 1999 movie The Matrix, in which the protagonist swallows a red pill to enter the real world) is often invoked, as are “alpha” and “beta” males (but not omega males).

In a 2013 e-book, The Manosphere: How the Red Pill, Game, and the Internet Are Revalorizing Masculinity for the 21st Century, Ian Ironwood, author of The Red Pill Room blog, makes his case in plain language:

The Manosphere is an angry place. Feminists love to talk dismissively about the anger there, as if male anger invalidates any reasonable point behind the anger. But that anger is understandable by any objective measure. That’s because our culture has treated men, as a class, very poorly while asking so much for them. …

For the last 40 years, men have been trying to adapt to the chaotic result of the Sexual Revolution and the dictates of feminism, and at long last they’re getting fed up.

In late June a Washington Post reporter, Monica Hesse, attended the first International Conference on Men’s Issues in St. Clair Shores, Michigan where, she writes, about 200 attendees—“mostly white, college-through-retirement-age”—found confirmation for their belief that “the world had become a hostile and dangerous place for males”:

This conference, billed as the first of its kind, was sponsored by A Voice for Men, an online publication for the men’s rights movement and one of the more prominent outlets in the “manosphere.” Originally, it was to take place at a Doubletree in Detroit, a city picked because it was an “iconic testament to masculinity,” according to promotional materials. But then something happened to the original plans. A Voice for Men said the hotel was issued death threats by feminists for agreeing to hold the conference; the hotel never confirmed or denied these reports. The conference was moved from the Doubletree to the suburban VFW, a yellowish linoleum room that organizers argued was even more appropriate and more masculine of a location.

Manospheric issues aren’t confined to North America. Writing recently in The Guardian (UK) about “The Everyday Fear of Violence Every Woman Has to Cope With,” Eva Wiseman noted the connection—if only rhetorical—between men’s rights activists and the misogynist “manifesto” of 22-year-old Elliot Rodger, who massacred six people near Santa Barbara, California:

Advocates of the men’s rights movement are united by their belief that feminism is the enemy. It’s made up of a mix of men – pick-up artists, male victims of abuse, father's rights proponents – who come together online. One of the most successful communities in the “manosphere” is Reddit's Red Pill. It has almost 53,000 subscribers who believe that women are designed solely for sex and sandwich-making. (I’m paraphrasing, but barely – one email I got this week suggested that “the women’s movement is breaking the circle of life, and our humanity”).

Although the online manosphere is often characterized by vitriolic anti-woman language, the Post’s Monica Hesse saw something else when she attended the ICMI conference: “an island of misfit boys and damaged men, who claimed to have believed in the system until it failed them.”

Judging by their feelings of persecution, I'm assuming these men are far-right Christian Republicans.

I'm pretty sure some of them are, though the only one I know reasonably well, AVfM contributor Dean Esmay, isn't.

Dan: I haven't seen any documented correlation between manosphere membership and specific political or religious sentiment other than, perhaps, some vaguely libertarian leanings. From what I've read (I don't know any manosphere men personally), the impetus to join up is more likely to be intensely personal--an acrimonious divorce, the loss of child-visitation rights, or, as with Santa Barbara shooter Elliot Rodger, anger at being spurned or ignored by women.