On the Visual Thesaurus: The Names of Frozen Desserts

My latest column for the Visual Thesaurus looks at the names of sweet, cold summertime treats, from generics like “ice cream,” “sherbet,” and “sundae” to brands like Good Humor, Eskimo Pie, and Häagen-Dazs. Access is limited to subscribers for three months; here’s a taste:

Popsicle: The Popsicle website claims this frozen treat was invented by accident in 1905 by 11-year-old Frank Epperson when he left a mixture of powdered soda, water, and a stirring stick on his porch overnight. (The site doesn’t specify where this took place; Epperson’s 1983 obituary said San Francisco, but temperatures there never dropped below freezing in 1905. Epperson in fact grew up across the bay, in Oakland, and that’s where he was living when he patented his “frozen confectionery” in 1923.) Epperson originally dubbed his creation the Epsicle, a blend of Epperson and icicle, but eventually renamed it Popsicle, allegedly because his children called it “Pop’s ’icle.” That too seems a stretch: as an early ad makes clear, the pop more likely came from “lollypop” (or lollipop), a word that first appeared in English in the late 18th century. In England, ice pops are called ice lollies. 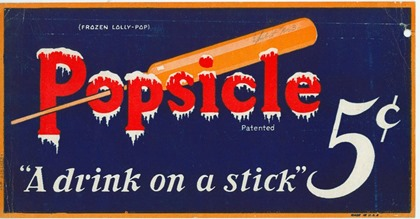 Via Collectors Weekly, “The Cold Hard Truth About Popsicles.”

Today the Popsicle trademark and brand are owned by Ice Cream USA, a division of Unilever, which also owns “the sicle family of trademarks,” including Creamsicle, Fudgsicle, and Yosicle.

Read the rest of The Scoop: How Frozen Desserts Got Their Names.

And speaking of Bay Area ice cream novelties, here’s a blog bonus: the official story—OK, stories—of how the It’s-It, invented in San Francisco in 1928, got its name:

Although nobody knows for sure, there are two stories that have been told. The first story recalls how the inventor, George Whitney, yelled “IT’S-IT” when he tasted the oatmeal cookie, vanilla ice cream and chocolate combination. The second story goes back to the old cow races that were held near Playland-at-the-Beach. One day, a cow named “It” won the race. Someone asked who came first, and the answer was “IT’S-IT”. George Whitney liked that. 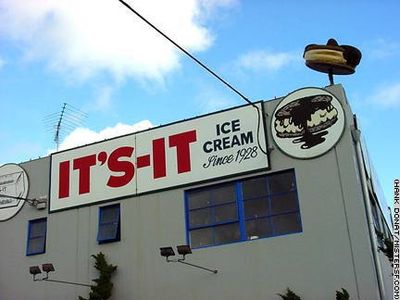 Whitney was more than an ice cream maker: he owned the Playland-at-the-Beach amusement park, the neighboring Cliff House, and the Sutro Baths and Museum; he was known as “the Barnum of the Golden Gate.” Until 1972, when Playland was torn down, It’s-It was available only at Whitney’s stand in the park. It’s now sold in supermarkets in California, Nevada, Washington, Oregon, and Hawaii—and can be shipped elsewhere, safely packed in dry ice.