« How the Argosy Bookstore Got Its Name | Main | Word of the Week: Manosphere »

The punctuation symbol for “and” has been showing up in some interesting places lately. 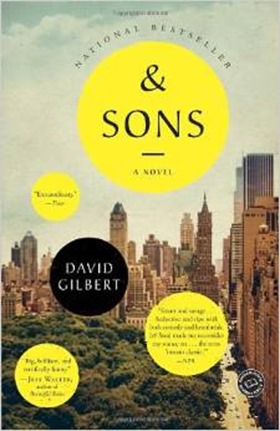 & Sons, by David Gilbert. Cover art for paperback edition (published May 2014). Amazon gives the title as And Sons.

James Wood begins his New Yorker review of Gilbert’s novel with this comment on the unusual title:

The stunted title of David Gilbert’s second novel, “& Sons” (Random House), does a lot of useful work. It hints at succession but also at severance; at a family tree but also at a broken commercial line. The implied absence gestures toward the great stories of intergenerational struggle: Turgenev’s “Fathers and Sons,” Gosse’s “Father and Son.” And then there is that cocky ampersand: slightly offen­sive in its abstraction, wearily dismissive, the key to the whole coda.

I love the personification in that last sentence.

In early April, PricewaterhouseCoopers(PwC) completed its acquisition of Booz & Company, a 100-year-old management consultancy that had been spun off of rival consulting firm Booz Allen Hamilton in 2008. That earlier spinoff had mandated a name change, which is why PwC’s new division is called Strategy&. Without a space. Or a complement to the conjunction.

The website has only this to say about the new name:

As part of the PwC network, Strategy& will be a leading strategy firm in its own right and help PwC as a whole become the pre-eminent strategy-through-execution firm.

The unusual new name is less digitally friendly than may have been intended. You can’t have an ampersand as part of a web address, so former and future clients will have to go to the URL “strategyand.com” to find the website. You could previously find the company at booz.com, which now redirects to the new site.

PwC’s last attempt to rename a business unit was its then-consulting unit, which it christened “Monday” in 2002 (paywall.) That move was widely criticized at the time. IBM bought the unit shortly after, so it’s unknown what the real impact of naming it after a day of the week would have been.

PwC was formed in 1998 when Price Waterhouse (whose history goes back to the London accounting firm of Samuel Price, founded 1849) merged with Coopers & Lybrand (which had had that name since 1957, but also claimed mid-19th-century roots). The odd capitalization was instituted at the time of the merger; poor Lybrand was consigned to obscurity.

In a name review published in June, Catchword’s Beth Gerber praised Strategy&’s “gutsiness” but judged it “dry and bookish: a one-dimensional name.”

To me, “Strategy&” looks less like a corporate name and more like the themeline for an ad campaign. In ads, the sentence could be completed: Strategy& … insights. Strategy& … execution. As a name, though, Strategy& is both too cute and too literal: telling us you do strategy-plus doesn’t give us a benefit, an emotional connection, or a reason to prefer your services over your competitors’. A punctuation mark, no matter how elegantly rendered—and this one is pretty boring—simply isn’t sturdy enough to support a brand identity.

For an elegant and—more to the point—meaningful ampersand, consider the new logo for the South Denmark Philharmonic (Sønderjyllands Symfoniorkester in Danish).

By using the ampersand as a visual bridge between two parties, the symphony orchestra became a brand that only truly existed together with its the community, guest conductors, soloists and audience.

The ampersand was also an visual abstraction of a G-clef known from written notes. The merging between two typefaces represents classical music in modern context.

The design element translates wittily to a variety of applications. 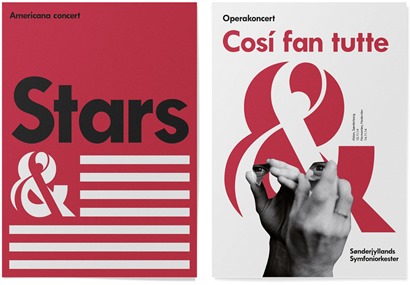 Note that the South Denmark Philharmonic isn’t pressing the ampersand into unnatural service as a name or title: it’s using it as a visual reference and shorthand. Bravi!

Read my other posts about ampersands, including the one in which I quote Ben Yagoda on the origin of what was once called “the 27th letter.”

Re strategy& — Booz & Company has long had a really excellent publication called strategy+business, as well as the domain www.strategy-business.com. I just checked, and both are still working, with a new masthead (strategy&) saying, "strategy+business is published by PwC Strategy& Inc." This makes their use of an ampersand even more interesting, since they already had a respected identity for strategy+. (It also shows an unresolved style issue regarding capital letters.)

You might also be interested in Wert & Company — www.wertco.com — an international executive search firm that uses the ampersand as a design element as well as visual reinforcement for what they do — connecting people. Each page of their website has an ampersand in a different typeface (with a library of options that change with each click), and their Twitter avatar has a really gorgeous one. I have been quite envious ever since they unveiled the new site.