How Ski-Doo Got Its Name

Ski-Doo, the snowmobile brand so widespread that it’s almost a generic term, was never meant to be called “Ski-Doo.” Its inventor, Joseph-Armand Bombardier, had named his creation “Ski-Dog,” because it was meant to replace a dogsled. As a 1992 article in Popular Mechanics explains: “Fortunately for Bombardier (pronounced bom-bar-dee-ay), an early brochure was misspelled and a winter legend was born.” 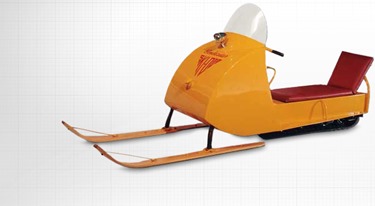 Bombardier, born in 1907 in the rural town of Valcourt, Quebec, had experimented with snow vehicles since he was a teenager. His first attempt, created when he was just 15, used a rear-mounted Model T engine and a wooden propeller. A 1935 prototype employed a sprocket-and-track assembly and floating suspension. In 1942 he founded Bombardier Recreational Products (now BRP); the company still has its headquarters in Valcourt but is now a multinational corporation that makes railway and aerospace parts, Evinrude outboard motors, and Can-Am all-terrain vehicles.

Ski-Dog wouldn’t have been a bad choice for the brand name, but as Ski-Doo the company benefits from the association with “skidoo” or “skiddoo”—to get away, to go out—an early-20th-century slang term that may have been derived from 19th-century “skedaddle.” It’s an appropriate association with fast-moving, terrain-defying vehicles—an association that carried over to the company’s aquatic brand extension Sea-Doo, launched in 1988. “Skidoo” is memorialized in the quaint phrase “23 skidoo,” about which Barry Popik’s Big Apple blog has the last word.

And as the 1992 Popular Mechanics story helpfully points out:

While the name of the most ubiquitous snowmobile was the result of a printer’s error, perhaps it wasn’t really a mistake. After all, there is a relationship between a dog and doo. Perhaps future historians will dig up the truth.

I know of at least two other companies that owe their names to typographical errors: Lane Bryant (a misspelling of founder Lena Bryant’s first name) and Lands’ End (whose misplaced apostrophe is attributed to an error in the company’s first catalog).

Previously in How They Got That Name: ASOS, Pitango.

Posted at 10:23 AM in Canadian, Errata, How They Got That Name, Spelling, Sports | Permalink