How ASOS Got Its Name

The online-only fashion and beauty retailer ASOS launched in London in 2000, began turning a profit in 2004, and first expanded outside the UK—originally to France, Germany, and the US—in 2010. Today the company has 4,000 employees and sales of £753.8 million (nearly $1.3 billion). The company sells more than 850 brands, including its own, and is the most-visited fashion website in the world, per day, among 18-to-34-year-olds. 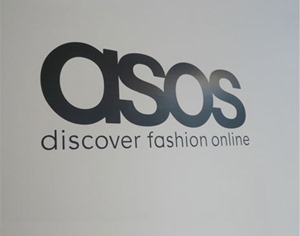 What does ASOS mean? It’s an acronym: the company was originally called As Seen On Screen Ltd.

The logo is lower case, but the company name appears in all caps everywhere else on the site. The media are less consistent: the Guardian (UK) spells it Asos; the New York Times has used both ASOS and Asos.

As for the pronunciation, opinions vary—some people use the A-S-O-S initialism, others rhyme it with “pesos”—but the consensus tilts toward “A-sauce” (rhymes with play-floss, emphasis on the first syllable).

ASOS isn’t the only company whose name has no fixed pronunciation. The official stance of Moleskine, the global notebook company, is that “there is no predetermined pronunciation” of its company name.

There’s another example that’s even closer to ASOS. In 2009 I wrote about Taiwan-based computer maker Asus, aka ASUS—the company uses all caps, the media don’t bother. Of the many pronunciations in circulation back then, Asus preferred “ah-SOOSE.” Then, a year later, it switched to “EH-soos.”

Pronunciation diktats are irrelevant in the eyes of US trademark law. As Jessica Stone Levy noted in a comment on that Asus post, “the USPTO at least lives by the precept that ‘there is no correct pronunciation of a trademark because it is impossible to predict how the public will pronounce a particular mark’.”

Yesterday on How They Got That Name: Pitango.

Read previous How They Got That Name entries.

Posted at 06:52 AM in Acronyms, Fashion, How They Got That Name, Pronunciation, Spelling | Permalink