Word of the Week: Trigger Warning

Trigger warning: Advance notice that a book, movie, or other material has content that could trigger emotional distress or a traumatic reaction. (From Word Spy.) May be abbreviated “TW.” 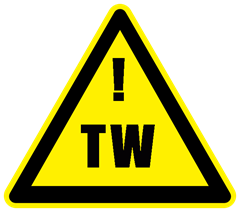 Trigger warnings have been front-page news for the last week, beginning with a May 18 story by Jennifer Medina in the New York Times headlined “Warning: The Literary Canon May Make Students Squirm”:

Colleges across the country this spring have been wrestling with student requests for what are known as “trigger warnings,” explicit alerts that the material they are about to read or see in a classroom might upset them or, as some students assert, cause symptoms of post-traumatic stress disorder in victims of rape or in war veterans.

The warnings, which have their ideological roots in feminist thought, have gained the most traction at the University of California, Santa Barbara, where the student government formally called for them. But there have been similar requests from students at Oberlin College, Rutgers University, the University of Michigan, George Washington University and other schools.

The comment section closed a week after publication, by which time 1,359 reader comments had been posted. The majority were critical. “Sadly, this almost reads as parody,” wrote one reader. Others called the protesting students “coddled,” “whining,” and “thin-skinned” as well as “hothouse flowers” and “wimps.” A few readers pointed out a distinction between, as one reader put it, “likely PTSD triggers and warnings of anything that may not be politically correct”; the former are valuable, the reader said, while the latter are not.

On May 18, The Atlantic’s Conor Friedersdorf took up the issue, reminding readers that “The Sopranos,” back in Season 3 (2001), displayed a “rape” warning before airing a particularly troubling episode. But even in unusual cases, Friedersdorf wrote, “where the concept behind ‘trigger warnings’ is likely useful, invoking the phrase itself is much less so, because it has become jargon.” (There are 350 reader comments on this article.)

On May 22, the New Yorker entered the fray with Jay Caspian King’s essay, “Trigger Warnings and the Novelist’s Mind” in the Page-Turner blog. “A trigger warning reduces a work of art down to what amounts to plot points,” King argued. (100 reader comments.)

Word Spy’s Paul McFedries has tracked the earliest citation of trigger warning to a September 1993 post on alt.sexual.abuse.recovery. (The post was also prefaced by “spoiler alert,” a term that’s been circulating since the early 1980s.)

Trigger entered English in the mid-17th century; it was spelled tricker until about 1750. Its origin is Dutch trekker, from a verb meaning “to pull” that also gave us the noun trek (a march or journey). The verb to trigger is much more recent, surfacing around 1930. Although “trigger warning” hasn’t yet appeared in any standard dictionaries, many other trigger compounds are in the OED, including trigger point (1891; a price level at which price controls are imposed or re-imposed); trigger man (1930; a gangster who guns people down); and trigger price (1978; a minimum selling price for steel imported into the U.S.).

Trigger was also the name of Roy Rogers’s horse and the nickname of a character in the British TV series “Only Fools and Horses” (because “he looks like an ’orse”). In the last decade or so, “Trigger”—along with other gun-related names like Shooter and Cannon—has surged in popularity as a U.S. baby name, according to the Baby Name Wizard blog. The blog’s author, Laura Wattenberg, observes:

Consider ... that gun names were always popular for dogs, suggesting that a love of guns is nothing new. A foxhound named Trigger would never have surprised anyone. Today, parents are more willing to “pull the trigger” on that kind of eye-catching name for babies, too. Just as we’re naming our pets more like children, it seems that we’re naming our children more like pets.

Posted at 06:01 AM in Animals, Baby Names, Books, Film, Word of the Week | Permalink