« Everybody Has Suggested Changing the Name | Main | May Linkfest »

I usually wait for three examples before I declare a trend, but this time I’m going to bend my own rule, because two examples—both spotted last week in TechCrunch—are more than enough.

From the TechCrunch story:

From whence the name? It’s a play to make the word “mortgage” less weighty and ponderous. According to [founder Patrick] Browne, the company thought that “S’moretgage could be a nice way to make that word sound a bit less intimidating.” Once you learn how to spell it, it’s not too hard to remember.

A couple of comments:

1. Memo to TechCrunch: It’s just “whence”—the word means “from where,” so “from” is redundant.

2. “Once you learn how to spell it” is a lousy way to launch a name. If you really want to compare indebtedness to an empty-calorie children’s snack, at least make the spelling easy to swallow. “S’mortgage” would work just fine—no need for the E in the middle, which makes the pronunciation look like it rhymes with “floret-rage.”

S’moretgage is based in New York. 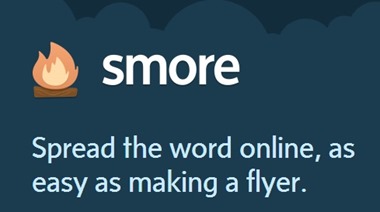 Yes, it should be “easily.”

Neither the Smore website nor the TechCrunch story gives any background on the name, but the campfire icon drives home the association. (The company is based in Palo Alto, and its founders appear from their names to be Israeli.) According to TechCrunch:

The service, which mostly targets non-technical users, says it currently has over 500,000 registered users, who have published over 1 million flyers. Usage and revenue currently growing at about 15 percent to 20 percent per month.

In related news: Only 95 shopping days till National S’mores Day! Here’s the beginning of an anthem (with musical cue):

When you toast chocolate chunks
With some marshmallow lumps—
That’s s’more!

I don't think I've seen a worse name than S'Moretgage. I am currently seething with floret-rage at the thought that someone either got paid to come up with this or was congratulated for creating it.