“Everybody Has Suggested Changing the Name”

“What if you never had to worry about food again?” asks the home page of Soylent. The company makes a product with the same name: a nutrient-rich food substitute designed to replace traditional meals. 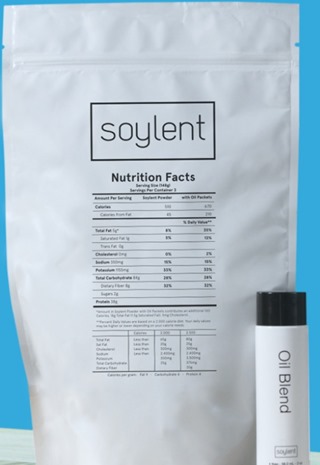 “The packaging is space age, with minimalist black-and-white lettering, reminiscent of Paul Mitchell shampoo.” – “The End of Food”

The New Yorker’s Lizzie Widdicombe traveled to Studio City, California, to interview Soylent’s inventor, Rob Rhinehart, and one of his partners, Dave Renteln, for “The End of Food,” published in the May 12 issue of The New Yorker. Inevitably, the subject of the name came up:

I asked if they really planned to call their product Soylent—which, in my unofficial field research, had evoked, at best, unpleasant associations with “soy” and “soil,” and, at worst, alarmed recitations of the movie catchphrase “Soylent Green is people!”

“Everybody has suggested changing the name,” Rhinehart said. “Investors, media people, my mom.”

Rhinehart said that he liked the self-deprecating nature of the name, and the way it poked fun at foodie sensibilities: “The general ethos of natural, fresh, organic, bright—this is the opposite.”

Anyway, he said, a lot of young people never got the memo about Soylent Green’s being people. “If you Google ‘Soylent,’ we’re in front of the movie.” He added, “Remember, Starbucks was the guy from ‘Moby-Dick.’ ”

I like the Soylent name—and the whole never-worry-about-food, anti-foodie premise—and wish Rhinehart much success. But he isn’t the first entrepreneur to seize on the “Soylent” name. Soylent Green Crackers (“People Food”) was developed by San Francisco’s Parallax Corporation as a conversation piece and a way to bring an imaginary, movie-spawned idea to life. Soylent Green Crackers have been around for a few years; I wrote about them in September 2011. They’re out of stock on Amazon.

For the hacker crowd, there’s a Make Your Own Soylent website with hundreds of recipes, many of them fancifully named: Metroid Nootropics, Bachelorette Chow, Dingosaurus_KetoFood, Soylent in Paris, Rainbow Unicorn Feed.

Posted at 06:01 AM in Film, Food and Drink, Naming, Startups | Permalink