« How Arduino Got Its Name | Main | April Linkfest »

Word of the Week: Ping

Ping: Imitative of the sound of a bullet striking something sharply (noun, 1835; verb, 1855). Ping has been used since the early 1920s in the U.S. to mean “an engine’s metallic rattle”; it’s spelled pink in the U.K. The OED’s earliest citation for ping meaning “a short, high-pitched electronic pulse” (as in sonar) comes from 1943: “‘Daisy had a ping about an hour ago... We're doing an Asdic sweep’... A ‘ping’ is the slang term for an echo.”

The computer sense of ping is attested from at least 1981; its original meaning was “to send a packet in order to determine whether a host is present, particularly by use of the ping utility”—a tool to troubleshoot problems in an IP network. The author of the ping utility, Mike Muuss, named it after the sound that sonar makes; it’s not an acronym, but a backronym was subsequently contrived: p(acket) in(formation) g(roper).

The word slipped into non-tech usage; the American version of Oxford Dictionaries Onlinegives one definition as “Contact a person briefly (especially electronically): he just pinged me, pointing to a breaking news story.’'

(If you don’t approve of using ping in this way, plese recall that the synonym contact was, until just a few decades ago, regarded with disapproval and even disgust.)

Ping and pinger have featured prominently in stories about the search for Malaysian Airlines Flight 370 (MH370), which disappeared March 8 en route from Kuala Lumpur to Beijing. Searchers have been listening for acoustic signals—pings—from the aircraft’s black box. 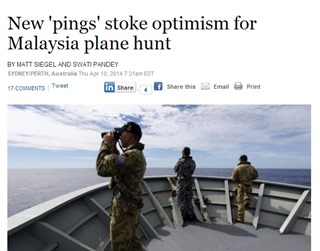 Until the plane’s location can be pinpointed, searchers have been relying on a device called a towed pinger locator (TPL) 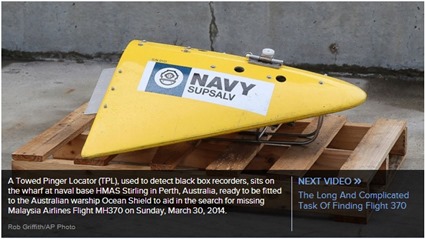 In various broadcast transcripts, “towed pinger locator” appears as “toad pinger locator”—a rendering that evokes an unforgettable if erroneous image. (I thank W. Brewer of the American Dialect Society email list for alerting me to the toad/towed mixup. “Actually,” he wrote, “<toad pinger> does
make some sense, rhythmically sending out a ribbit, waiting for a return response. Although the robot more resembles a sting-ray.” You can read more in this vein by going to the ADS-L archive and searching for “pinger.”)

Speaking of toads, until October 2013, Ping was the name of a mobile messaging app. After the company received a cease-and-desist letter from PING Golf—which owns ping.com and is not in the mobile, or even static, messaging business—Ping changed its name to Hop. (Ah yes—the toad connection.) I’m a little surprised the challenge didn’t come from Bing.

Actually, Yahoo got there first. 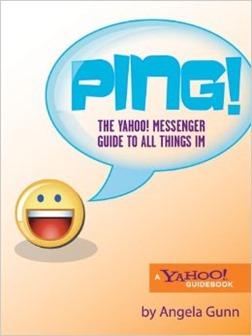 That was around the time Yahoo Messenger ran ads saying “Ring’em [sic] or ping’em [sic]: Make PC-to-phone calls as low as 1¢/min with Yahoo! Messenger with Voice.”

And long before any of these electronic pings, there was The Story About Ping. 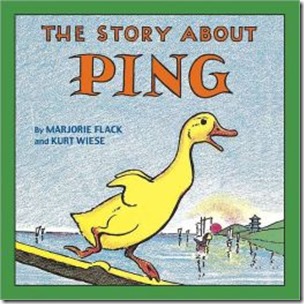 “Once upon a time there was a beautiful young duck named Ping…” Story by Marjorie Flack, illustrations by Kurt Wiese; originally published in 1933.

This guy isn’t buying it:

Posted at 06:31 AM in Books, Current Affairs, Disasters, Technology, Word of the Week | Permalink

As techno-neologisms go, "ping" is tops in my book. I think its best use is to reflect what the original meaning above says - that one issues a ping "in order to determine whether a host is present." In the lawyer-ese that I speak as a second/third/fourth/etc. language, I most often use "ping" to indicate that I'm contacting someone from whom a response is overdue. So it's not "Hey, what's on your agenda today? Well, I thought I'd ping opposing counsel to set up a settlement conference," but rather "Hey, opposing counsel hasn't gotten back to me, so I'll ping her."

For those of us running WordPress blogs, the notification we receive when someone else has linked to something we wrote is called a "pingback." (WordPress also created a service to notify aggregators, with the cheery name "Ping-O-Matic.")

My favorite onomatopoeic use is in the birth scene in Monty Python's "The Meaning of Life." The essential piece of equipment in the operating room is "The machine that goes 'Ping.'"
https://www.youtube.com/watch?v=arCITMfxvEc