Word of the Week: Apothecary

Apothecary: A drugstore or pharmacy; a person who prepares and sells drugs or medicines.

When apothecary entered English in the mid-1300s, it had a more general meaning than “druggist.” Its late-Latin source, apothēcārius, meant “store-keeper”; the Latin word came from Greek apothēkē, “a repository or storehouse.” That older meaning persists in two close linguistic cousins of apothecary: Spanish bodega (a small grocery store) and French boutique (a small retail shop).

Until recently, apothecary had a musty reputation in American English: Its usage had declined steadily for the last 150 years (see the Google Ngram), and when it appeared at all, it was often in histories or historical fiction.

Lately, though, there’s a subtle but noticeable uptick, especially in certain quarters—including my own Oakland environs—characterized by a critical hipster mass. And its meaning appears to be reverting to the medieval one.

Hog’s Apothecary, which opened on 40th Street in September 2013, is “a gastropub where beer and sausage rule,” according to a November 2013 review in Oakland magazine:

[J]ust as a pharmacy serves an array of cures for ailments, so Hog’s Apothecary serves a number of “cures” to its patrons. [Co-owner John] Streit says, “The idea is that when you make sausage or make bacon, you put a cure on the meat. And we have an array of drinks, and some people rely on that as their cure.”

I noted a couple of other interesting items about Hog’s Apothecary. 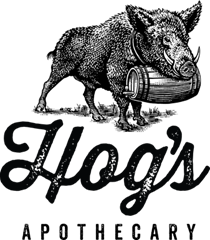 Just a few blocks from Hog’s is Homestead Apothecary, which opened in March 2013. Homestead Apothecary (no relation to Homestead Restaurant, about half a mile away) fits the popular image of an apothecary: it sells medicinal herbs and offers “community centered holistic education.”

A couple of neighborhoods over, on Grand Avenue, you’ll find Ancestral Apothecary, dedicated to “remembering and reclaiming folk & indigenous medicine.”

And a few blocks up Grand, the stylish and pricey McMullen boutique includes an “apothecary” section on its website for lotions and potions. (The online cupboard is currently bare.)

Apothecary also shows up in Brooklyn, the Oakland of New York. In addition to druggist-style apothecaries like Bridge Apothecary and Heights Apothecary, I spotted a haircare/cosmetics apothecary in the Woodley & Bunny salon and an apothecary section in the By Brooklyn website where you can buy soaps, candles, scents, and lotions—all made in Brooklyn, of course.

Posted at 07:59 AM in Etymology, Food and Drink, Oakland, Restaurants, Retail, Word of the Week | Permalink