The trouble isn’t the unimaginative name of HBO’s new comedy series, which the pay-cable network has just renewed for a second season, just three episodes into Season 1. Rather, I’m talking about the major plot point of Episode 3, “Articles of Incorporation,” which aired Sunday night.

The business and tech bloggers who covered the episode found nothing amiss in the story. But to anyone who knows how business names work, it betrays the naïveté of the show’s creators.

The protagonist of “Silicon Valley” is a programmer, Richard, who’s inadvertently developed a file-compression algorithm. For reasons that haven’t yet been explained (and may never be), he named the algorithm—and the start-up he creates around it—“Pied Piper.”

Everyone but Richard hates the name. But that’s not his biggest headache.

Richard doesn’t own the rights to the name Pied Piper, which is also a sprinkler business in California. (Fun fact: in reality, there are several businesses named Pied Piper operating in the Bay Area, including one described as a management consulting agency and one that is a rat extermination business). Richard treks out to meet the owner of the sprinkler company, who agrees to give up the rights to the name for $1,000.

Here’s the thing: Even in a fictional universe, the sprinkler-company owner can’t own “the rights to the name.” Sure, he might own the piedpiper.com domain—more about that in a bit—but in fact, that subject isn’t in the script. (It’s a very curious omission: tech entrepreneurs tend to be obsessed with URLs.)

On the other hand, he may have trademark protection—another term that’s never mentioned—for the Pied Piper name, but from the evidence that would be wholly irrelevant: the two Pied Pipers operate in different legal contexts. The name of the sprinkler-system company would be registered in Class 7 (which covers machines and machine tools), while Richard’s company would be registered in Class 9 (computer software). As long as there’s no likelihood of confusion in the marketplace between the two businesses, there’s no trademark conflict. (See: Dove soap, Dove chocolate.) A trademark lawyer would have explained this to Richard in about two minutes.

Whatever. For the episode’s writers, Matteo Borghese and Rob Turbovsky, this business of name “ownership” is merely a MacGuffin to propel us toward a spoof of zany/dumb startup names. In the middle of the episode, while Richard’s down in Gilroy (or, as the script erroneously has it, “up” in Gilroy) bargaining with the sprinkler-company owner, the other guys in the startup—who never liked the Pied Piper name—make a weak attempt to brainstorm a replacement. Now we’re back in the ridiculously real world. 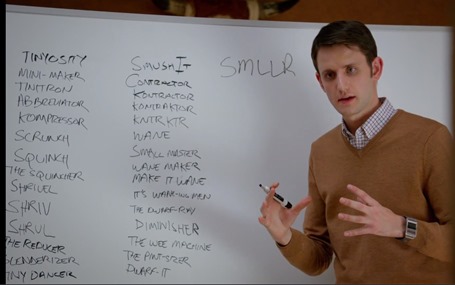 Jared: “What about SMLLR? Spelled S-M-L-L-R. Because we make things smaller, and this would be, like, a smaller version of the word smaller.” Gilfoyle: “Looks like Smeller.”

The Jared-Gilfoyle exchange sounds painfully plausible. And the other names on the whiteboard—from Tinyosity and Squinch to SHRVL and Make It Wane—also have the ring of verisimilitude. It’s not just that they’re silly in a familiar startup-ish way: it’s that they’re stuck in a descriptive rut, naming a feature (“we make things smaller”) rather than a benefit. That’s typical of the output of inexperienced, too-close-to-the-subject namers. For all its oddness, Pied Piper at least shows some metaphorical ingenuity.*

(By the way, it surprised me that in all the snarking about Pied Piper no one mentions that its initials are “pee-pee.” Given the general air of arrested adolescence in the house—and given that the show’s creator, Mike Judge, also created the epically puerile “Beavis and Butthead”—it’s hard to believe this would pass unnoticed and uncommented on.)

Here are a few other things “Silicon Valley” gets right, from this brand consultant’s perspective:

Fake website. HBO bought piedpiper.com last November and launched a hilariously spot-on website this week. That blather about “integrated, multi-platform functionality” that will “make the world a better place”? Yes, people in Silicon Valley actually talk like that.

“Weissman Score.” The website misspells it “Weisman,” but in fact this madeupical metric was developed by, and named for, a real engineer. “HBO’s Silicon Valley wants to get the details right,”** wrote Bryn Elise Sandberg in the Hollywood Reporter:

The creators went to great lengths to make the app seem as realistic as possible, even teaming up with Stanford professor Tsachy Weissman and his graduate student, Vinith Misra. The two created the math behind the “Weissman Score” -- a tool uniquely created for the show that measures the effectiveness of compression algorithms -- used in the first episode to evaluate Richard’s formula.

Twitter account. “Saving the world one compressed file at a time” is exactly the sort of lofty, derivative drivel we’ve come to expect from a tech startup. 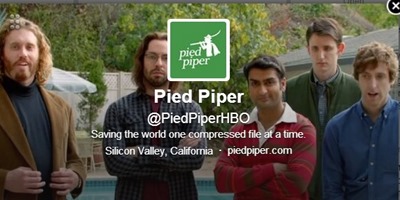 (I’ve written quite a few posts about the “One X at a Time” trope.)

And Pied Piper’s tweets have been amusing, too.

@iampepperberry well thank you! We're so jealous of your name. Too bad we already paid $1000 for ours or we would've started negotiating.

Erlich’s bloviating. Erlich Bachmann owns the house-slash-“incubator” the Pied Piper guys live and work in. His claim to cockiness is an aviation-tech business called Aviato that he sold for several million dollars.*** Erlich is wont to say things like this:

I am, without a doubt, stealing those pearls of wisdom for my next client presentation.

* The historical, or quasi-historical, Pied Piper of Hamelin is associated with a 13th-century legend about the departure or death of a great number of children from a town in Lower Saxony, Germany. In an alternative version, the Pied Piper lures the rats away from the town by playing his magic flute. “Pied” means “patchy” or “splotchy.”

** The tech details, anyway. The spelling, the location of Gilroy, the domain stuff, the trademark stuff: not so much.

*** I was surprised to discover there’s no actual Aviato—anywhere. A trademark application was filed in 1993 for an Aviato “command communications” company, but it was abandoned in 1994. The owner of Aviato.com is someone in Ireland who may be selling it. It’s a pretty decent name.

Re original Pied Piper: The way I remember it, he lured out all the rats, and when the townspeople wouldn't pay him as agreed, he piped away all their children, who followed him into a door in a mountainside and were never seen again. Moral of the story, I assume, is "Pay the piper!"

Jan: It's tempting to connect "He who pays the piper calls the tune" to the Pied Piper story, but in fact the saying appears to have an independent origin: http://www.deproverbio.com/display.php?a=4&f=DPjournal&r=DP,5,2,99/MIEDER/PIPER.htm