Today, March 14, is Pi Day (3.14), at least in countries that express dates in that order. Somewhere in the trillion digits of pi I’m pretty sure there’s a 23, which is my number of the day. Here are some 23-named brands … and some loosely related factoids.

TechCrunch calls the photo-sharing app 23snaps “a Facebook for families.”

Why “23snaps”? Here’s the official story:

Did you know that there are 23 pairs of chromosomes that carry all of the genetic information that makes your child the wonderful, unique person they grow to be? One chromosome, like one photograph, is just not enough to tell the whole story.

When I originally wrote about 23andMe, in 2007, the company was just over a year old and still doing DNA testing for health risks. It has a new logo now. 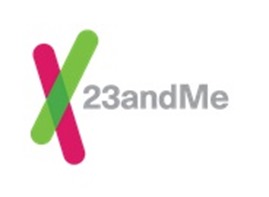 It also has changed its business model. In December 2013, in response to a Food and Drug Administration warning letter, 23andMe suspended its health testing. It now provides only “ancestry-related genetic reports.” 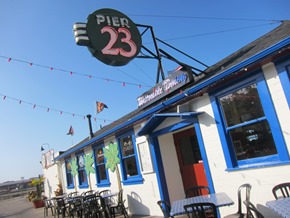 Photo via A Tiger in the Kitchen.

The restaurant has been owned and operated since 1984 by my Dolphin Club swimming pal Flicka McGurrin, who is also an excellent artist (with 23 pairs of chromosomes). 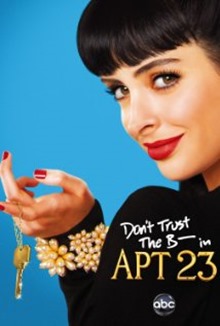 The origin of “23 skidoo,” a phrase associated with the 1920s but in fact a couple of decades older, is shrouded in mystery. Barry Popik’s Big Apple blog discredits three popular theories; the World Wide Words discussion forum shreds seven. It is a dead certainty that the “23” has no relationship to human chromosomes, because their correct number wasn’t determined until 1956.

There is a vintage-clothing store called 23 Skidoo in Campbell, California (Santa Clara County). 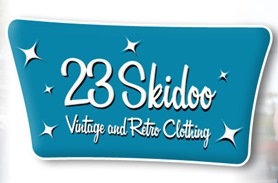 Learn additional interesting facts about the number 23—the smallest prime number that isn’t a twin prime!—in my July 2007 post about 23andMe.

When I was in college, in the early 60s, I'm pretty sure the number of chromosomes (or so we were taught in zoology) was 48, or 24 pairs. That number was updated some time after that.

Dan: I suspect your college was using out-of-date textbooks. In case you missed it, I link in the post to the Wikipedia entry about chromosomes: http://en.wikipedia.org/wiki/Chromosomes#History_of_discovery

"The number of human chromosomes was published in 1923 by Theophilus Painter. By inspection through the microscope he counted 24. Surprisingly, his error was copied by others and it was not until 1956 that the true number, 23, was determined."

Now if I could just find out what 23 flavors go into Dr Pepper.