Name in the News: Oiselle

In the world of elite runners and their fans, this was huge news. I probably speak for the rest of us when I say my response to the story—discovered via a tweet from author/runner Rose George—was “Oi-what?” 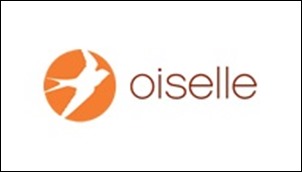 The logo contains a clue: oiselle, according to the company’s About page, is “a French word for bird.” (It’s not in my French-English dictionary. According to my French-speaking resource Jessica Stone Levy, who has a better dictionary, it translates to “hen-bird,” whatever that means, and “the familiar meaning is damsel.” Adds Jessica: “I would say it’s lucky that not even a French major knows that meaning of the term.” Even a French minor knows the common word for bird, oiseau; one online source suggests that oiselle is the female form of the word, and this source gives the meaning of oisellerie as “bird-catching” or “bird-breeding.” )

As for the pronunciation and backstory, here’s Oiselle founder and CEO Sally Bergeson, herself a serious amateur runner (2:59 marathon):

In hindsight, it would be untrue to say that I haven’t cared deeply about running fast and even winning. But for me, and the small family that makes up Oiselle, the sport has always been about something more. At various times it’s our therapy, escape, religion, and girl time. But perhaps simply enough, it’s been our sense of freedom. And thus the name Oiselle (pronounced wa-zell). A French word for bird, it alludes to that feeling of weightlessness that most runners know and love. That sense of flight – when the legs go fast and the heart goes free.

This is a great story, and it goes a long way toward justifying a name that breaks all the conventional rules: it’s obscure, hard to pronounce, and hard to spell.

Sometimes, though, a “difficult” name is the perfect choice. And this strikes me as one of those times.

As I’ve written in the past, context counts. Here’s what I wrote then about another peculiar-seeming name, Melvyl:

University of California librarians didn’t need to be told the etymology behind Melvyl, the name of UC’s online library system: They recognized the name of Melvil Dewey, father of the Dewey Decimal System. Dewey’s first name is obscure to us laypeople, but that’s OK with librarians. They probably appreciate being spoken to in a sort of code.

“Obscure to outsiders, resonant with insiders” is what’s going on with Oiselle, too.

Oiselle (the company) is bent on cornering a very specific niche market: women for whom running is central to their lives. Their love of running sets them apart; they may refer to one another as “sisters.” They’re a bit obsessive (a 2:59 marathon, if you please!).

For this audience, a brand name gains value by sounding special, distinctive, even rare. The brand name becomes something of a shibboleth: “a word of pronunciation that distinguishes people of one group or class from those of another.” If you stumble over the pronunciation of Oiselle, you’re obviously not a member of the club.

Then there’s the -elle ending of Oiselle: French for “she,” it’s a clue about who’s being talked to (and who isn’t). Not for nothing, I like that Oiselle suggests “gazelle,” a fast, graceful animal that lives to run.

Birds aren’t rare in commerce. There’s Angry Birds, of course, and its chirp-alikes (although Flappy Bird flaps no more). A popular sprinkler brand is called Rain Bird. And Twitter’s bluebird is familiar even to those who disdain social media.

Oiselle takes a common, even overplayed metaphor and makes it feel fresh, authentic, and slightly exotic. Yes, you may stumble the first time you try to say the word. But runners stumble, too—and if they’re dedicated, they pick themselves up and press on.

(But it’s a good thing Oiselle is in Seattle and not Portland. The “put a bird on it” jokes would be never-ending.)

A “difficult” name like Oiselle requires a deep, even stubborn commitment on the part of management. It can easily become a liability if you don’t cultivate it and continually infuse it with fresh significance.

Most of all, though, it helps to know your audience. Are they risk-takers and experience-seekers? Then you may want to take that risk and create that experience.

Posted at 07:28 AM in French, Names in the News, Naming, Pronunciation, Retail, Spelling, Sports, Women | Permalink

Flyte - thanks for the reminder to read or watch "Brideshead Revisted" again (the one with Lord Larry, natch).

This is truly an excellent illustration of a comprehensive brand story. If only others took the time and effort to make it sing like this.

Great post. I really like the name Oiselle, it resonates with me right away. I could also see this working well in the Canadian market as most people would recognize the word but probably be intrigued by the spin put on it.

I had (have) a similar issue with my blog, which I called 'Lexicolatry'. For me, it's the perfect name, as similarly minded word lovers instantly get its meaning. But ... people forget it easily and sometimes find it hard to spell (pronunciation never seems a problem, but for a blog that doesn't really matter).

I have considered changing it, but I've come to love it and I don't think it would be the same for me if it was called something else - it would kill some part of it. And if that happened, if my enthusiasm was dampened, that would do far more damage than a slightly obscure name ever could.

The reference to "damsel" made me think of "mademoiselle," which I'd never examined before. Does it translate literally as "my damsel"? If so, then "Oiselle" may resonate with those of us who know some French, even if the only Frehch word for "bird" we know is "oiseau." (When I first saw this post I asociated "oiselle" with "oiseau" and thought vaguely "Oh, an obscure or archaic variant of a familiar word.")

I'm guessing that the long run of Mademoiselle magazine -- last published 2001 -- helps a lot in making "Oiselle" a less mysterious word. And Elle, of course, is recognizable female, what with Elle magazine and Elle Woods etc. Anyway, I agree that it's a nice name, fresh but perhaps not as foreign as it first appears.

Really nice post, Nancy, and I agree with the preceding two commenters. My only quibble is with " suggests “gazelle,” a fast, graceful animal that lives to run." That may be so, but most assuredly it runs to live!

Hi Nancy! Thanks so much for your great post on our brand name. You hit the nail on the head as to why I chose the name. What most people don't know is that before Oiselle, I was a professional product and company namer. Clover (the Starbucks single cup brewer) and Plan B (emergency contraception) are my two most well-known brand names (my old website is still up...waywords.com). For Oiselle, my mission was to own an "empty vessel" and fill it with meaning, the same advice I had been giving my clients for 10 years. I actually wanted to own Oiseau initially. But it was already taken in our TM class, IC 25 (apparel), and thus I had to revert to my giant old Larousse dictionary...scanning down through the variations, I found this antiquated version. That's when it dawned on me that it was even better than Oiseau, which after all, is a male word. As for the many mispronunciations, I do take a quirky word as a point of pride, and don't mind the variations. In fact, one of these days, we're going to do a video where we ask people on the street how to pronounce it so we can capture as much of the mishaps as possible. Should be fun. Thank you again for the shout out!

Great story, great name, and it makes total sense that the woman behind it used to be a professional brand namer!