I’m pleased to announce the launch of the Sentrant Introducer Sheath from Medtronic, Inc. Sentrant was named by my consulting firm, Wordworking. 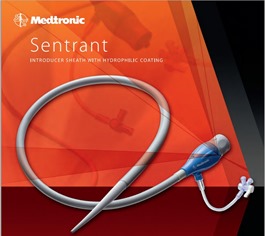 Not all new product names compete on grocery shelves or in the app store. Some, like Sentrant, are meant to appeal to a niche audience—in this case, endovascular surgeons around the world.

Medtronic, which was founded in Minnesota in 1949, is the world’s largest medical-device company, with offices around the globe. Until Sentrant, the company had not sold an introducer sheath—a device used to introduce any of a number of instruments into the body, usually through a small vessel.

After I met with the Medtronic team in Santa Rosa, California, I developed a naming brief to guide the creative work. Our naming objectives—what Medtronic hoped the name would communicate—included “effortless,” “leakproof,” “navigating difficult terrain,” “kink resistant,” “flexible,” “seriousness,” and “prevents leaks passively.” Competitors’ names used “flow,” “seal,” “flex,” and “check,” so we had to avoid those words and their derivatives. The negative outcome “leak” was also undesirable as a vocabulary source.

With all the obvious directions off the table, I explored other words: security, impermeability, guidance. I looked at words whose letter shapes (a slender I or V) suggested the pinpoint accuracy of the Medtronic device. I considered metaphorical names like Passport and Pilot.

One of the more promising directions turned out to involve the concept of “guarding”: the sheath protects the instrument it conveys, and it also protects the body’s vessels and organs. Sentrant emerged from this exploration. A blend of sentry and entrant, it combines the concepts of protection and entry. As an invented word, it suggests innovation, yet its meaning is apparent. Its classical roots make it appropriate for a worldwide audience that uses many Latin or Latin-derived words as a lingua franca.

Furthermore, Medtronic was already selling products whose names end in -ant, including Valiant, Reliant, and Endurant. Although the client team had not specified that the new name needed to resemble other Medtronic names, the similarity turned out to be an asset. Now surgeons familiar with the other Medtronic names would recognize Sentrant as having the same trustworthy parentage.

You’ll notice that Sentrant does not communicate all of the naming objectives. It doesn’t say “flexibility” or “kink resistance,” for example. Why? Because no single name can, or should, convey four concepts. That would blur the message into incomprehensibility. Instead, Medtronic uses Sentrant as the title of the story, and tells the rest of the tale in the product description.