Kizzle kazzle: In the sport of curling, “a delivered stone that is intentionally wobbled to compensate for water, slush or snow on the ice surface.” (Source: Wikipedia.) Etymology uncertain: None of my standard references, including the Oxford English Dictionary, has an entry for the word, and other sources repeat the Wikipedia definition. Could it be onomatopoetic? Scottish dialect? Maybe one of you well-informed readers will enlighten us.

Curling has been an Olympic sport since the 1998 Nagano games; before then, it had sporadically been included as a demonstration sport. The sport—played by two teams of four players each who sweep a concave convex stone across the ice toward a fixed mark in the center—originated in 17th-century Scotland, where it resembled lawn bowling on ice; curling probably came from “the motion given to the stone,” says the OED.

The OED cites an 1890 history of curling:

Curling, when first practised, appears to have been a kind of quoiting on the ice..Coiting, kuting, or quoiting, was for a long time the word in common use to describe the game, and in some districts it is still applied to it.

Quoit has been in the English lexicon since the late 14th century, possibly from Old French coite, a flat stone. The game of quoits is related to the game of horseshoes.

Curling competition in the 2014 games, in Sochi, Russia, will begin Monday, February 10. The evening competition will include a USA-Norway match, sure to be avidly followed even by curling ignoramuses like me, because: 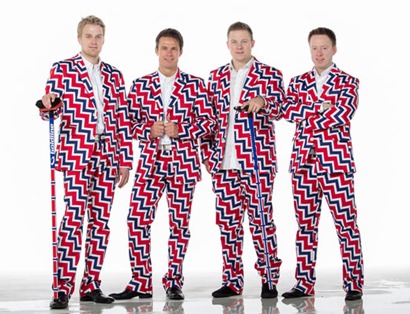 According to a New York Times report, the Norwegian team has another uniform “that’s black and flowery and could be called grandmother-chic.”

You may remember these flashy dressers from the 2010 Olympic Games in Vancouver, BC: 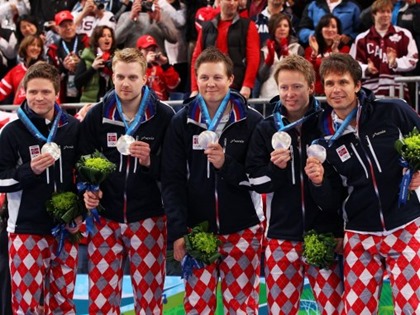 The pants outshone the silver medals. The uniforms stood because in curling, according to the Times, “athletes traditionally wear black and draw little notice outside curling circles.”

The best part about this uniform story, for me at least, is its local angle: The Norwegian teams’ uniforms are made by Loudmouth Golf (excellent company name) in Foster City, California, 22 miles southeast of San Francisco. Before the 2010 Winter Olympics, the company was best known, if at all, for wildly patterned golf pants and college-football fanwear.

The wacky uniforms “kind of took the edge off everything,” Norway team member Christoffer Svae told the Times reporter:

“When our games were not going too well, we’d look at each other and think, Oh, you look like a clown. So it made us feel at ease.”

Read the rest of the Times story, which, alas, yields no further insight into kizzle kazzle.

Posted at 08:25 AM in Fashion, Olympic Games, Sports, Word of the Week | Permalink

Those Norwegian-flag suits remind me of another -zzle word:
http://99percentinvisible.org/episode/episode-65-razzle-dazzle/

I lived briefly in Kilsyth, Scotland, where I learned MUCH about curling... I'd love to learn to play, but... I'm thinking I'll go for something less apt to melt the ice, in terms of searing color...!

Erm... I think you meant "convex" when you stated, "...sweep a concave stone...." A concave stone would be hollowed out, and somehow cave-like (which is how I remember the difference).

The sport is endlessly fascinating, for some reason. I find myself just watching it, somehow amazed that it's there, and that people do such things.

NF: Right you are! Fixed.