« February Linkfest | Main | On the Visual Thesaurus: The Names of Film Production Companies »

Word of the Week: De-Elephant

De-elephant: To discuss an existing but unacknowledged topic (i.e., “the elephant in the room”). Also de-elephantify, de-elephantize.

I learned of de-elephant just last week, via a tweet of Stan Carey’s:

This word is now the elephant in the room RT @wordspy de-elephant v. To discuss an existing but unacknowledged topic. http://t.co/OajUA8Bk74

Paul McFedries of Word Spy provided two examples of de-elephant from the week of February 10, and found a 2009 citation for de-elephantize. About “elephant in the room,” McFedries noted that “[t]his sense of the phrase is not as old as you might think, with the earliest OED cite only going back to 1984.” 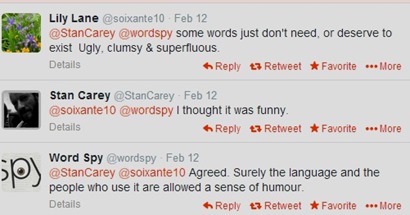 I think de-elephant is funny and useful. I’ve added it to my vocabulary along with recombobulation.

Elsewhere in pachydermal metaphors, I wrote about “white elephants” in 2012, and about the hybrid locution “the pink elephant in the living room” in 2009.

Posted at 07:18 AM in Animals, Neologisms, Word of the Week | Permalink

I have heard a couple of people mention "the white elephant in the room." (Maybe they need to recombobulate their metaphors.)