A San Francisco startup called Gramr has blasted past its $15,000 Kickstarter goal in less than two weeks and appears likely to reach its “stretch goal” of $50,000. Before I give you any links or clues, try to guess from the name alone what Gramr makes. Language-learning flash cards? National Grammar Day T-shirts? An app that corrects your faulty subject-verb agreement?

No, no, and no. Gramr looks and sounds exactly like “grammar,” but the company has a completely different mission. 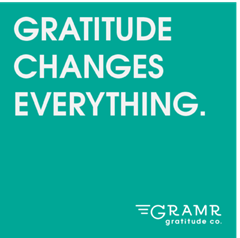 “Gratitude Changes Everything” sticker from Gramr.

Gramr calls itself a “gratitude company”; its product is thank-you cards—the paper kind that you put in a square envelope, seal with sealing wax, and mail with a postage stamp. The business model is a subscription service like BirchBox and RocksBox: every month, a new box of cards. Co-founder Matt Richardson told TechCrunch he wants to “turn the world into a more grateful place.”

It’s an admirable goal, and Gramr gets a few points for not choosing a copycat “box” name. But the “Gramr” name sends at least three wrong messages:

Other aspects of this fledgling brand’s verbal strategy also strike me as half-baked. For example, why is the $8 pledge level on Kickstarter called “gracias” and the $88 level “danke”? Is German ten times more meritorious than Spanish? The names of giving levels can give your overall brand a boost—take note, nonprofit organizations—but they need to follow a rational, consistent system. When Gramr suddenly abandons the foreign-language strategy in favorite of categories like “California Dreaming” and “The ‘365’ Plan,” we feel a little lost.

Don’t get me wrong: I like writing and receiving thank-you cards, and I applaud Gramr’s commitment to old media and the U.S. Postal Service. I do hope, however, that the company changes its name. (Let’s talk.) They’ll be thankful in the long run.

A square envelope! Which requires extra postage, of course. And then, there are still a few etiquette mavens out there who frown on preprinted anything. The name (misguided as it is) is not the only problem here.