On the Visual Thesaurus: The Names of Film Production Companies

It’s Hollywood awards season, and while I intend to watch every minute of the Academy Awards broadcast, I’m only mildly interested in the traditional voting categories. Instead, I’ve been obsessed with the inventively named production companies behind some of this year’s Oscar nominees. That’s the subject of my new Visual Thesaurus column, “And the Oscar for Best Production-Company Name Goes to…”

Full access is restricted to subscribers. Here’s a preview:

Best use of an invented language: Esperanto Filmoj (Best Picture nominee Gravity) is the name of Mexico City–born director Alfonso Cuarón’s production and distribution company. Cuarón is a fan of Esperanto, the international language invented in the 1880s and spoken today by 100,000 to 2 million people worldwide. “I’ve done movies in different countries, and I believe that human beings are born human first and afterward they stamp the passport,” he told an interviewer last year. “So I was looking for a name that advocates that sense of ‘universal language’.” “Esperanto Filmoj” means “Esperanto films” in Esperanto; the word “Esperanto” means “one who hopes.”

Blog bonus! One of my favorite production-company names doesn’t appear among this year’s Oscar nominees, but I can’t resist telling its story. Clint Eastwood’s production company, Malpaso Productions, was named for Malpaso Creek, located near Carmel, California, where Eastwood lives (and where he served a term as mayor in the 1980s). According to a Wikipedia entry:

The creek has very steep side slopes and had only one crossing (a ford only 10 feet above sea level) until 1935, when a concrete bridge was constructed for State Highway 1. When Eastwood agreed to take the role of the Man with No Name, his agent told him that it would be a “bad step” for his career. After the Dollars Trilogy made it big and Eastwood decided to run his own production company, he thought “Malpaso” would be an appropriately ironic choice.

Here’s another Wikipedia entry that lists a boatload of U.S. film production companies.

Here’s a set of flash cards so you can test your knowledge of production-company names. (Are you surprised that David Lynch’s production company is called Absurda & Asymmetrical? I didn’t think so.)

And here’s a GQ blog post from 2010 that offers lessons in naming your own Hollywood production company: “Self-deprecation works in Hollywood, as long as you're wildly successful. … If you direct, produce and edit all your films, moving fluidly from big budgets to experimental indies, go with Section 8 Prods. (Steven Soderbergh). If you redefined modern comedy, paving the way for Judd Apatow, there's always Conundrum (Peter and Bobby Farrelly).”

Speaking of Conundrum, here’s a slide from a 2011 Vanity Fair story about production-company names: 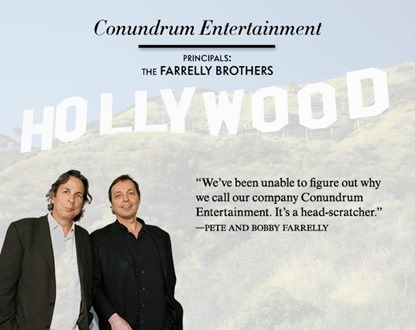 Guess the title of the VF story.

What would be your film production company name? I know mine.

Posted at 06:43 AM in Film, Naming, Visual Thesaurus | Permalink