Word of the Week: Trebuchet

Trebuchet: A stone-throwing engine of war. The word was imported from French into English in the 13th century, when the device was invented; the French verb trabucher meant “to overturn, overthrow,” from tra- (from Latin trans-, here expressing “displacement”) and Old French buc “trunk, bulk.” (Source: Online Etymology Dictionary.) 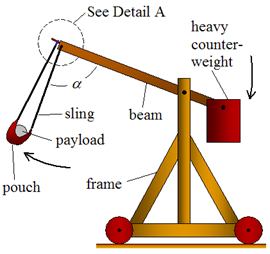 Drawing from Real World Physics Problems, which notes that “the payload could be thrown a far distance and do considerable damage, either by smashing down walls or striking the enemy while inside their stronghold.”

Trebuchets have been in the news lately because of their role in the antigovernment protests that have been taking place in Ukraine since November 2013. “The Battle for Ukraine Is Being Fought Using Ancient Military Tactics” read a January 22 headline in Business Insider. While protesters favoring European integration built a trebuchet in the capital city of Kiev (or Kyiv), government forces adopted an ancient Roman shielding tactic called the testudo, Latin for “tortoise.” 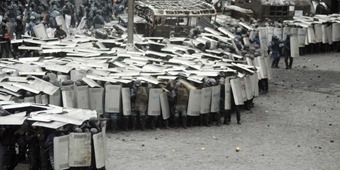 Photo: Reuters/Maks Levin. More photos at The Atlantic and Slate.

What’s the difference, you ask, between a trebuchet and a catapult? I looked it up for you. According to Jarod’s Forge, a history blog written by museum curator Jarod Kearny, a catapult is “any device that throws an object, although it commonly refers to the medieval siege weapon”; a catapult uses tension for its throwing force. Trebuchets “are a TYPE of catapult, using gravity (with a counterweight) or traction (men pulling down), to propel the arm and often employing a sling at the end of the arm for greater distance.”

The distinction is sometimes overlooked in coverage of the Ukrainian conflict. RT.com (formerly known as Russia Today) called the machine a catapult:

Puzzled protesters and journalists watched Monday as a group of masked people studied some plans, standing next to a pile of long wooden poles they had carried to a central Kiev area earlier.
It soon turned out the protesters were building a catapult – or, as some argued, a trebuchet.

And there was this:

RT @Walldo: naturally the homemade catapult used by protesters in Ukraine has its own Twitter account -> @ukr_catapult

Other words that frequently appear in coverage of the protests include Maidan (square, plaza), a word with cognates in Arabic, Persian, and Urdu; Berkut (“golden eagle”), the riot police; and Moskal (a derogatory term for a resident of Moscow). For more, see this Radio Free Europe glossary.

Posted at 07:21 AM in Current Affairs, Military, Russian, Word of the Week | Permalink

Fans of the (wonderful, sadly retired) comic strip “Cul de Sac” got quite familiar with trebuchets; the preschool heroine, Alice, has a friend whose brothers are always building trebuchets in their yard.

There is also a typeface called Trebuchet. From Wikipedia:
Trebuchet MS is a humanist sans-serif typeface designed by Vincent Connare for the Microsoft Corporation in 1996. It is named after the trebuchet, a medieval siege engine. The name was inspired by a puzzle question that Connare heard at Microsoft headquarters: "Can you make a trebuchet that could launch a person from main campus to the new consumer campus about a mile away? Mathematically, is it possible and how?" Connare "thought that would be a great name for a font that launches words across the Internet".