« The -ly Name Trend: Not Just for Tech Startups | Main | Word of the Week: Kizzle Kazzle »

Name in the Wild: Wheels of Justice

I snapped this sign on Mountain Boulevard in Montclair Village, a neighborhood of Oakland: 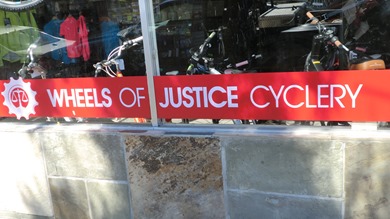 An odd name for a bicycle shop, I thought. I seemed to recall a proverb, or a quote from a famous person, along the lines of “The wheels of justice turn slowly, but grind exceedingly fine.” Well, what bicyclist wants slow, grinding wheels?

I looked it up, and it turns out the original quote is a little different, although it’s frequently misrepresented: It has to do with “the mills of the gods” rather than “the wheels of justice,” and it goes all the way back to ancient Greece. In his poem “Retribution,” Henry Wadsworth Longfellow singularized the deity:

Though the mills of God grind slowly;
Yet they grind exceeding small;
Though with patience he stands waiting,
With exactness grinds he all

But guess what? This is totally beside the point! Because the name of the shop has nothing to do with Longfellow or the Greek Skeptics. It’s an eponym. The owner’s name is—wait for it—Justice Baxter.

Now, “Justice” is a fairly uncommon boys’ name in the United States. The Baby Name Wizard Name Voyager shows it appearing out of nowhere sometime in the 1980s. (I don’t know Justice Baxter’s age, but he’s owned the bicycle shop since 2002, so he may have been born right around then.) The name’s popularity among boys peaked at 411 per million babies in 2006, and it’s been dropping ever since. 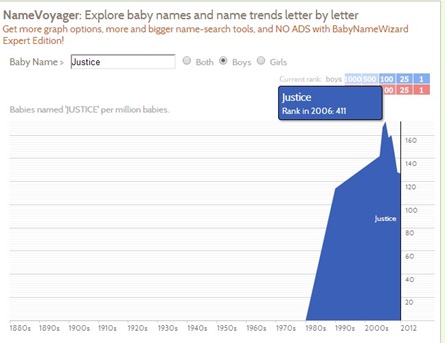 Also in the 1980s, “Justice” began showing up as a girls’ name. It hasn’t been as popular for girls, but that graph line is still rising. 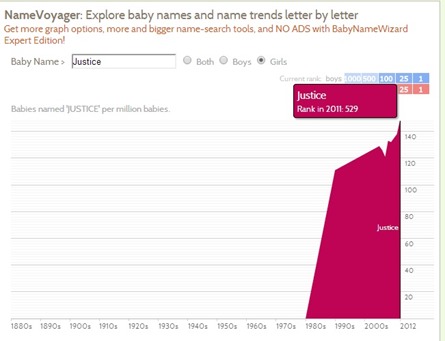 Baby-name experts have categorized Justice among the new “virtue names”—21st-century counterparts to the Faith, Hope, Charity, Patience, and Comfort so popular with the Puritans. Other “new virtue names” include Logic, Rhyme, Reason, Destiny, Curiosity, Savvy, and, yes, Virtue.

A female Justice—17-year-old Justice Toliver—was in the news last week because of a tragedy: She was the victim of a fatal shooting in her Oakland, California, apartment. The prime suspect, her 14-year-old brother, turned himself in to police yesterday.

A word of warning: Don’t even think about naming a child of either sex “Justice” if you live in New Zealand. Since 2001, according to Harper’s Index (August 2013), New Zealand’s Registrar of Births, Deaths, and Marriages has rejected baby names 311 times. Sixty-two of those rejections have been for the name “Justice.”

Yes, that headline would read “Justice Denied in New Zealand.”

Posted at 06:42 AM in Baby Names, Current Affairs, Eponyms, In the Wild, Names in the News, Naming, Oakland, Retail, Sports | Permalink

And there's the heroine of John Singleton's film Poetic Justice, who writes poems and indeed is named Justice. This is about the only time I ever thought Singleton, who directed the excellent Boyz n the Hood, overplayed his hand.

You might also note that the name Justice is homophonous with the traditional (but fairly rare in the US) name Justus. The name is more common in Roman Catholic Europe because it's been borne by few saints.