« How Sludge Became Biosolids | Main | Word of the Week: Afterdrop » 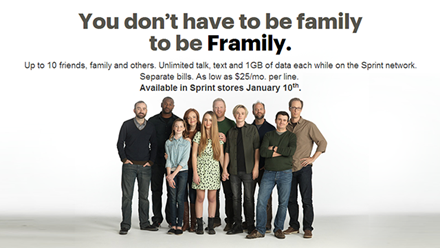 “You don’t have to be family to be Framily.” (“That is not a typo,” advised Lifehacker.)

“Up to 10 friends, family and others,” it says up there. Why not go all in and call it Framiloth?

Maybe “Framily” will catch on as shorthand for Friends and Family. (And maybe, somewhere out there, there’s a burning demand for a 10-line mobile plan.) But I’m doubtful. The Framily name elicits winces and groans, not smiles. An undercooked hybrid, it’s the turducken of telecom.

* Now, that is a good portmanteau.