In the Wild: Bitcoin Billboards

Spenders of the world, unite! You have nothing to lose but your change. 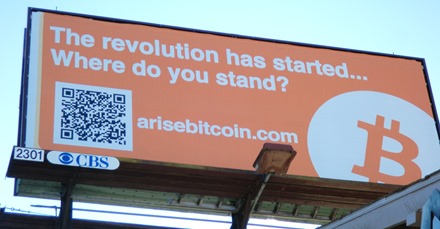 The organization behind the sign, Arise Bitcoin, says its mission is “to start, support, and execute projects that promote the awareness of bitcoin to the general public.” It claims to have posted more than 40 billboards throughout the Bay Area since December 27, 2013. (According to Arise Bitcoin’s Twitter bio, the organization is based in Cleveland, Ohio.) 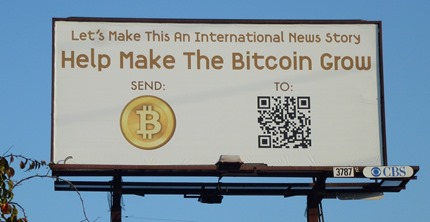 Bitcoin, in case you haven’t been reading my blog, is the virtual currency (or cryptocurrency, or altcoin) invented in 2009 by the pseudonymous Satoshi Nakamoto. The value of one bitcoin was about $900 yesterday.

Bitcoin’s popularity has inspired as many as 70 rival altcoins, according to a Bloomberg.com report. They include Coinye (named for singer Kanye West), Dogecoin (named for the doge meme), and RonPaulCoin, named for the libertarian former presidential candidate.

Have you seen any bitcoin billboards in your area?

Posted at 07:37 AM in Advertising, Banking, In the Wild | Permalink