Word of the Week: Scrumpy

Scrumpy: Rough cider made from dried or withered apples. The OED’s earliest citation is from a 1904 edition of the English Dialect Dictionary (“These apples are of no good but to make scrumpy of”); scrump (“anything withered or dried up”) is documented from 1840. Scrump and scrumpy are probably related to scrimp (from the 18th century, of obscure origin), which can be an adjective or adverb meaning “scant” or “meager” or a verb meaning “to economize” or “to be sparing of.” 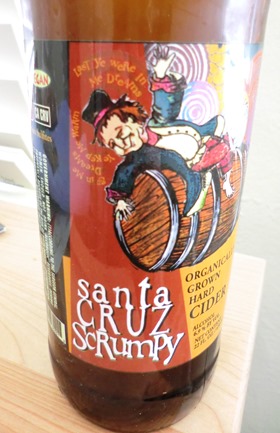 I discovered “scrumpy” in the name of Santa Cruz Scrumpy hard cider. Here’s how the label explains it:

Scrumpy is the name traditionally given to stroke farmhouse cider, made from grateful apples and created with love because there was so little to go around. It is with this tenacity that we craft small batches of Scrumpy from four select varieties of apples. Enjoy!

“Hard” or alcoholic cider—in which much of the fruit’s sugar is converted to alcohol—is generally between 5 and 5.5 percent alcohol by volume; above 7 percent it’s taxed at a higher rate, like wine. At 6.9 percent, Santa Cruz Scrumpy comes in just under the limit. (It’s made by Hallcrest Vineyards in Santa Cruz County, California, although you won’t find that information on the Hallcrest website or on the Scrumpy label, which gives a “Surf City Cider” web address that turns out to be parked.)

Hard cider is enjoying a bit of a boom in the U.S., according to a recent report on NPR:

Cider is still a small part of the overall alcohol market, but it's growing faster than any other category, according to Donna Hood Crecca, an adult beverage analyst with the company Technomic.

Most of that comes from major beer makers that have jumped into the cider game. The companies that brew Sam Adams, Coors and Budweiser have all gotten into the apple fermenting business in the past couple of years.

Earlier this year, another NPR story noted that “sales of domestically produced hard cider have more than tripled since 2007, according to beverage industry analysts.”

Part of cider’s appeal is its lack of gluten, a no-no for anyone with celiac disease and a faddish taboo for many otherwise healthy people.

Cider has a long history in North America. John Chapman (1774-1845), better known as the folk hero Johnny Appleseed, wandered around the American frontier in the early 19th century, planting and distributing apple seeds to pioneers. The fruit from those seeds wasn’t destined for pies, however. Cecil Adams, author of the Straight Dope blog, explains:

In the 1700s and 1800s, most apples were grown not for eating but for making hard cider. Johnny Appleseed didn't just bring fresh fruit to the frontier, he brought the alcoholic drink of choice.

Cider was safer, tastier, and easier to make than corn liquor. You pressed the apples to produce juice, let the juice ferment in a barrel for a few weeks, and presto! you had a mildly alcoholic beverage, about half the strength of wine. For something stronger, the cider could be distilled into brandy or frozen into applejack (about 66 proof). In rural areas, cider took the place not only of wine and beer but also of coffee, juice, even water.

Scrumpy is probably not related to scrumptious, which first appeared in writing in 1833 and is probably a colloquial alteration of sumptuous, according to the Online Etymology Dictionary.

Also, in British English, "scrumping" means to steal apples from someone else's tree or orchard.

Huh. In the fiction of Sir Terry Pratchett, the same substance is called "scumble." Which sounds a great deal less appetizing even than scrumpy.

It all sounds like diseases of the scalp. *shudders*

I tried this cider and scant, meager, or lacking in the author's note is fitting in describing its flavor. Sulfite was far stronger a taste than apple.