« Call for Nominations: Names and Words of the Year | Main | Word of the Week: Scrumpy »

The lights, the carols, the shopping-mall Santas: verily, ’tis ’Tis the Season season once again. The ’tis-ing started early this year (mid-October!) and shows no sign of abating. In fact, this year I discovered a Tis the Season store—correction, “Christmas Shoppe”—in Millersburg, Ohio. (The apostrophe on that Tis is mysteriously missing.) And if the website design is any indication, this is a place to shoppe till you droppe in a queasy stupor.

So that’s where the apostrophe went!

It’s been two years since my last ’tis-the-season-palooza, so my sleigh is full. You have been warned.

And in case you’re wondering why I bother, here’s Baltimore Sun editor John McIntyre once again on this ubiquitous holiday cliché. He addresses his admonition to his fellow newspaper editors, but it’s equally relevant for copywriters:

This year’s hall of shame:

Retailer Uniqlo took the dubious lead with this October 15 tweet:

‘Tis the season for scarves. Send us a picture of your favorite scarf and tag @UniqloUSA.

If you feel compelled to ’tis, at least take a nanosecond to orient the apostrophe the right way.

And don’t hang that apostrophe on the caboose, Amtrak. Tis’ the season? Does Amtrak HQ suppose the apostrophe is a purely decorative garnish? Is no one aware that the full expression is it is, and that the initial apostrophe stands in for the I in it? Who’s conducting this train?

This email from Amazon arrived on November 4. 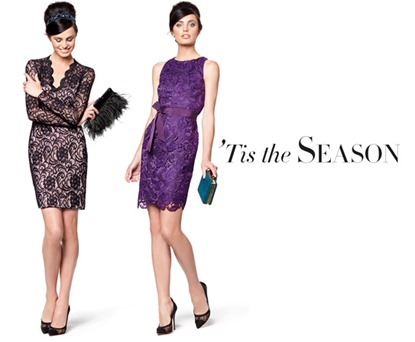 A mailer from Dell arrived on December 6. “’Tis the season for time savings.” 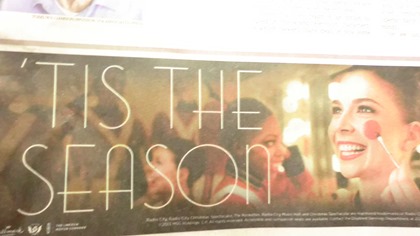 “’Tis the season” for the Rockettes, I assume. 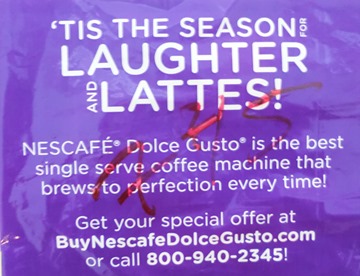 ’Tis the season for laughter and lattes … and wrong-way apostrophes.

An email from Madewell, November 19.

’Tis the season for gift ideas and new arrivals. 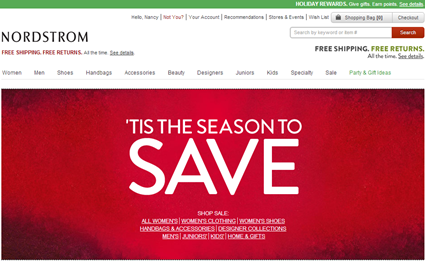 ’Tis the season to SAVE.

Gump’s (established 1861) is one of San Francisco’s oldest continuously operating retail establishments and a dazzling destination for luxury goods. (It was also the inspiration for Forrest Gump’s name.)

Neither heritage nor upscale-itude has prevented Gump’s from succumbing to ’tis abuse. Ad in San Francisco Chronicle, December 1. Additional demerits for this misspelling of “reins” on the Gump’s website:

With the beginning of a new century, the Gump brothers handed over the reigns to Solomon’s son, Alfred Livingston.

Procter & Gamble got all ’tissy in an ad insert in the December 1 Chronicle. 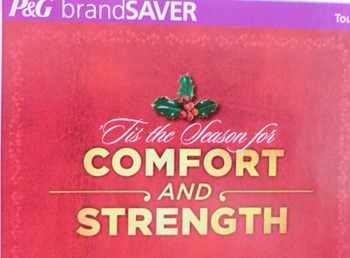 ’Tis the season for comfort and strength.

The California Academy of Sciences, in Golden Gate Park, took out a full-page ad in the San Francisco Arts Monthly to do its ’tis-the-seasoning. 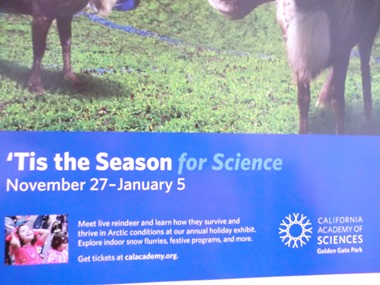 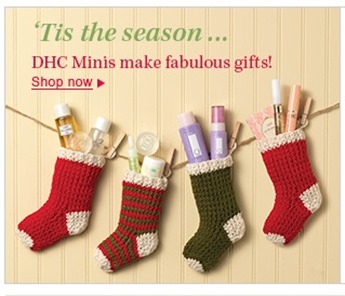 This one makes me sad. 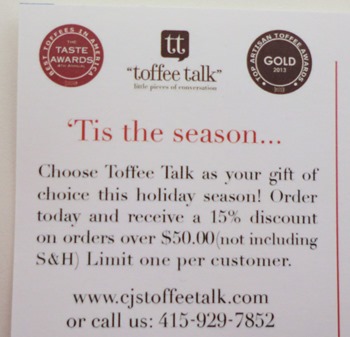 Not only do I love the Toffee Talk name (and the tagline: “Little Pieces of Conversation”), but this Bay Area company makes truly outstanding toffee. Someone should have taken the owner aside and explained about holiday clichés and wrong-way apostrophes.

And to all a good night.

Toffee Talk - what a great name! Can you educate them in exchange for goodies? (I've offered my skills with wine lists but haven't been taken up on it ...)

We can probably say that 'tis has taken up a life of its own. Cliche, yes, but so is Santa Claus, presents, and everything else that is 'traditional' about this holiday in the US. 'Tis has become apart of the linguistic symbolism of the season. Acceptable (modern) usage of the term prevents 'tis from being used outside of the Christmas holiday.

However, that isn't 100% true either. You can vary 'Tis to Tis and Tis' and they are all considered equal (as non-elite variations of Christmas English).

The necessity of standardized (elite) variations of English are questionable here, in fact, maybe even detrimental in most cases. The usual rules and norms obviously do not apply. In fact, the question shouldn't be about regulating 'tis to the elite variety of American English. Instead, the question is: How do you set your Christmas culture far enough apart to build its own norms (and be catchy) and still be recognized as part of the Christmas culture? In this light all variation can be helpful, even if it abuses standardized variations of English.

An exception would obviously be places where elite variations of American English are expected at all times (such as, college newsletters, newspapers, academic journals, etc). In such places, standard English is a sign of validity, and thus non-standardized variation is always bad press even if it can set you apart.