Word of the Week: Petrel

Petrel: Any pelagic seabird of the order Procellariiformes, in particular the shearwaters (Procellariidae), the storm-petrels (Hydrobatidae), and the diving petrels (Pelecanoididae). All have “long wings, mainly black (or grey or brown) and white plumage, and a slightly hooked bill with tubular external nostrils” (OED). 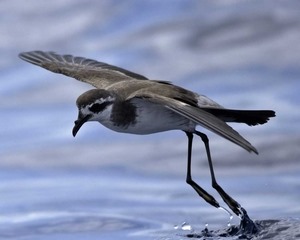 “Petrel” is the English translation of the Chinese word Haiyan, which is the international name of the “supertyphoon” that has ravaged large areas of the Philippines in recent days. (In the Philippines, the typhoon was called Yolanda.) The typhoon, one of the most powerful ever recorded, brought waves as high as 15 feet and may have a death toll of as many as 10,000 people, according to weekend reports. (Photos of the devastation here and here.)

The origin of the word “petrel” is “uncertain and disputed,” says the OED. A 17th-century spelling was pitteral; the Online Etymology Dictionary when the English explorer William Dampier recorded the modern spelling in 1703, he wrote that “the bird was so called from its way of flying with its feet just skimming the surface of the water, which recalls the apostle's walk on the sea of Galilee (Matt. xiv:28); if so, it likely was formed in English as a diminutive of Peter (Late Latin Petrus).” However, this is likely a fanciful folk etymology.

Although “storm petrel” is the correct ornithological term, a famous poem by Maxim Gorky has sometimes been translated from the Russian with the title “The Song of the Stormy Petrel,” and “stormy” frequently appears in the bird’s name. Here is one stanza as translated by Lyudmila Purgina:

The stormy petrel, screaming, hovers,
As the black lightning in heavens,
As an arrow, he is piercing
The grey clouds, with his wing
He is picking up the wave's foam.

The poem is a call for revolution written as a fable; after its publication in April 1901, Gorky was arrested and later released.

Posted at 07:37 AM in Animals, Chinese, Etymology, Naming, Weather, Word of the Week | Permalink

A character in Clifford Odets' "Waiting For Lefty" says "We're storm-birds of the Revolution!"