« Death Week: Tricks and Treats | Main | On the Visual Thesaurus: The Ascent of Sherpa »

Word of the Week: Aril

Until relatively recently, aril was one of those words—like etui and adit—that the average person encountered only in crossword puzzles. Now, thanks to POM Wonderful, the California pomegranate-products company, aril stands a chance of becoming accepted as a household word. 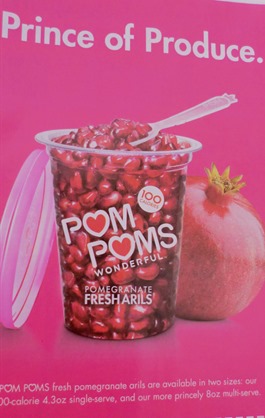 I’ve prepared and eaten pomegranates for much of my life, and I’ve never known those “ruby gems,” as they’re called by POM Wonderful’s PR agency, as anything other than “seeds.” (That’s what they’re always called in the Persephone myth.) But to someone in marketing, “seed” must have sounded like something to be discarded, whereas a “fresh aril”—note the sonic resemblance to “fresh air”—sounds tasty and healthful.

In fact, arils are the only edible part of a pomegranate (for humans, anyway). Each fruit has about 800 of them, and when I’ve had to extract them manually I’ve usually been ready to quit at around 687. So thank you, POM Wonderful, for outsourcing this chore.

POM Wonderful introduced POM POMS in October 2011; the product is available through February. November, by the way, is National Pomegranate Month—an observance that seems to have popped up around the time POM Wonderful was ascending to market domination.

Happy National Pomegranate Month! Join us in celebrating all things pomegranate, all month long. RT if you LOVE #pomegranates as much as us.

POM Wonderful was founded in 2002; the earliest mention I found for National Pomegranate Month appeared in 2007 in the POM Wonderful blog.

The pomegranate tree is native to Iran and was introduced to California by Spanish missionaries in the 18th century. In recent years there’s been some research linking pomegranates with health benefits; a previous POM Wonderful ad campaign trumpeted those findings with headlines like “Cheat Death” and “Death Defying.” In 2010 the U.S. Federal Trade Commission accused POM Wonderful of false and misleading advertising, and in 2012 an administrative judge issued a cease-and-desist order to the company.

A footnote about the POM POMS product name: To several generations of newspaper copy editors, including my own, “pom-pom” could only be used to refer to a certain type of automatic gun that first saw service during the Second Boer War. That tufty thing shaken by a cheerleader was a pompon, with an N—the original French spelling. But the third edition of Garner’s Modern American Usage (2009), the AP Stylebook, and the New York Times Manual of Style and Usage now sanction “pompom” for the cheerleader accessory. Bryan Garner, in his entry in GMAU, says “usage has shifted toward pompom in recent years because so many people misheard the word, and because of the linguistic tendency toward reduplicative sounds[.]” He classifies the double-M spelling as “Stage 5” (fully accepted).

Posted at 07:04 AM in Advertising, Food and Drink, Naming, Word of the Week | Permalink

I learned the word "aril" last year when I saw some chocolate-covered pomegranate arils at Whole Foods. I confess that when I bought some more a couple of weeks ago it was largely because I had enjoyed learning the word.