“Selfie” Is Oxford Dictionaries’ Word of the Year

Oxford Dictionaries, the traditional early bird in Word of the Year (WotY) contests, has announced its selection for 2013: selfie.

Oxford’s definition of selfie: “a photograph that one has taken of oneself, typically one taken with a smartphone or webcam and uploaded to a social media website.” 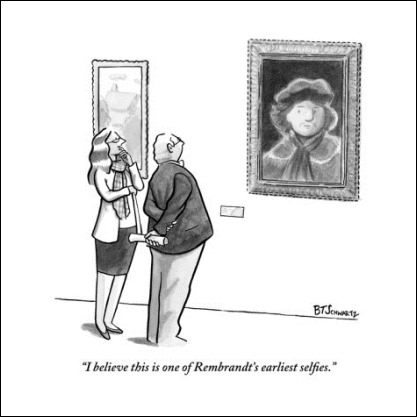 According to Oxford, “the frequency of the word selfie in the English language has increased by 17,000% since this time last year.” The word first surfaced in 2002 on an Australian online forum; it was added to OxfordDictionaries.com in August 2013. (The Australian citation was discovered earlier this year by a member of the American Dialect Society listserv, HugoVK, who posted it to Wiktionary.)

Selfie was independently selected by the American language scholar Allan Metcalf, who a month ago wrote in Lingua Franca that selfie was a “perfect word”:

It’s transparently about the self. It’s selfish, but the diminutive suffix -ie makes it cute selfish instead of mean selfish. And it is quite literally a self expression, in both senses of that term.

Runners-up in the Oxford contest included twerk, binge-watch, bitcoin, and two Fritinancy words of the week: showrooming (April 2012) and shmeat (May 2013).

More WotY fun is still to come, leading up to the American Dialect Society’s vote on January 4, 2014, during the society’s annual meeting in Minneapolis. I’m working on my WotY list; how about you?

Posted at 07:25 AM in Australian, Etymology, Word of the Year | Permalink

As the mother of two teenagers who use Snapchat all day long, I concur with the choice of "selfie," and think that it's a great word - one that real people use, unlike the more faddish "twerk" (which the aforementioned teenagers NEVER use).