A Radio Shack ad in last Sunday’s newspaper straddles the line between taboo and avoidance. 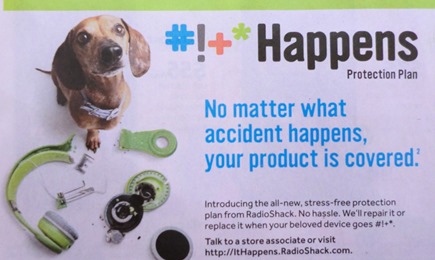 That string of symbols is known as an obscenicon; the word was coined by Ben Zimmer* in 2006 as an improvement on “cursing characters.” A few years later, linguist Arnold Zwicky argued for “obscenicon” over “grawlix,” one of the terms invented by cartoonist Mort Walker for the same concept:

[Obscenicon] was invented as a technical term in linguistics — well, that tiny part of linguistics that concerns itself with devices for taboo avoidance in print. … In the case of the obscenicons vs. the grawlixes, I don’t see any overlapping territory worth disputing about. Both words are relatively recent coinages of technical terms, in specialized fields that have little to do with one another. And in fact even the older (by about 40 years) grawlix isn’t of sufficiently general use in sufficient numbers to have made it into any of the general dictionaries of English — though after this web discussion, it might get there, and maybe eventually obscenicon too.

In the headline, Radio Shack uses #!+* to mean “shit,” as in “shit happens”: the fact that the formal name of the protection plan is the demure “It Happens” makes this pretty clear. But the later reference to “when your beloved device goes #!+*” makes it confusing. (Your beloved device goes shit? Goes apeshit? Goes ass-over-teakettle? I could go on, but won’t.) Notably, Radio Shack did not choose the more obvious character substitution of $#!+, a string that actually resembles S-H-I-T.

Winking near-profanity has been enjoying a moment in advertising. See my previous posts on “Kiss My Sass,” “Do You Give a Cup?”, “F’n Easy,” and “Look at the Booking View!” You’ll find links to other examples within those posts.

Update: In a tweet, Ben corrected me on the definition of “obscenicon," saying it referred to each character in the string:

Posted at 07:00 AM in Advertising, Profanity, Retail, Symbols | Permalink