On the Visual Thesaurus: The One and Only Thanksgivukkah

My new column for the Visual Thesaurus examines Thanksgivukkah, the madeupical name for the Thanksgiving-Hanukkah convergence that occurs this year—and won’t occur again for another 75,000 years, according to one calculation. (Hanukkah begins at sundown Wednesday, November 27, so the first full day of the Jewish holiday is Thanksgiving Day, November 28.) 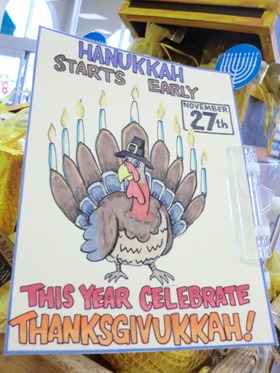 Your Thanksgivukkah gift: no paywall on the column! (But remember: subscriptions are only $19.95 a year and make excellent gifts!) Here’s an excerpt:

While Thanksgivukkah is a recent neologism, the combined-observance concept is familiar by now. Other Thanksgiving variations have included Friendsgiving (a Thanksgiving celebration sans family, documented as early as 2004) and Planksgiving, which is either a month-long fitness challenge (perform as many “plank” positions as you can) or a holiday invented by the writers of the TV show “Hart of Dixie” in which residents of the fictional town of Bluebell, Alabama, dress up as pirates. A few years ago I wrote about Chrisumukkah, Chrismahanukwanzakah, and other invented winter holidays; last month I caught a reference to Diwaloween, a blend of the Hindu holiday of Diwali and Halloween, which occurred close together this year. There’s also “Falloween,” which, Word Spy tells us, “unites the words fall and Halloween to recognize the lengths to which many people now go to celebrate the latter.”

Read the rest of “The One and Only Thanksgivukkah.”

Blog bonus: The recent coinages Thanksgivukkah, Chrismukkah, and Friendsgiving follow a decades-older example, Franksgiving. In 1863, President Lincoln proclaimed the final Thursday in November as a national Thanksgiving holiday; in October 1939, President Franklin D. Roosevelt moved the date to the fourth Thursday in an attempt to bolster retail sales, which were still in a Great Depression slump. The late switch prompted immediate opposition; 22 states that year kept the traditional date, November 30 (“Republican” Thanksgiving), while 23 states accepted the new date, November 23. Three states observed both dates, as did Atlantic City, New Jersey, whose mayor dubbed the new date Franksgiving “in honor of our president.” After two years of divided Thanksgiving loyalties, Congress in 1941 declared FDR’s choice to be the official date, and Americans have observed Thanksgiving on the fourth Thursday in November ever since.

Posted at 05:58 AM in History, Holidays, Portmanteaus, Visual Thesaurus | Permalink