Word of the Week: Demised

The list of synonyms for “fired” is long and growing, as corporations attempt to distance themselves from the gloomy realities of ruthless staff-slashing. 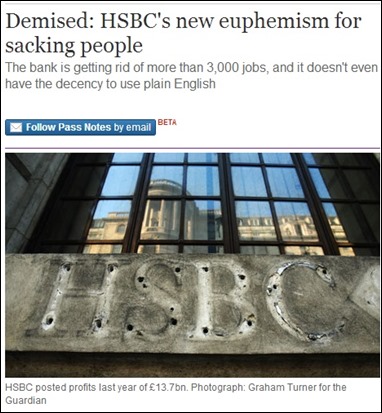 “Demised” is etymologically accurate—the Latin roots mean “to send away”—but its kinship with the synonym for “death” makes it more of a dysphemism than a euphemism.

I wrote about the legal meaning of demise—“to grant or transfer by will or lease”—in April 2012. The original meaning of “demise,” from the mid-15th century, was the legal one; the meaning was extended to “death” (because that’s when estate transfers usually occur) in the mid-18th century.

Posted at 09:09 AM in Death, Euphemisms, Word of the Week | Permalink

I wonder how this led to the term "demising wall", meaning "Boundary that separates one tenant's space from that of the other, and from the common corridor."

Jeff: I touched on this meaning in my previous post on the legal use of "demise": http://nancyfriedman.typepad.com/away_with_words/2012/04/word-of-the-week-demise.html