« Word of the Week: Chirality | Main | Name in the Wild: Mandelay »

This Is the End 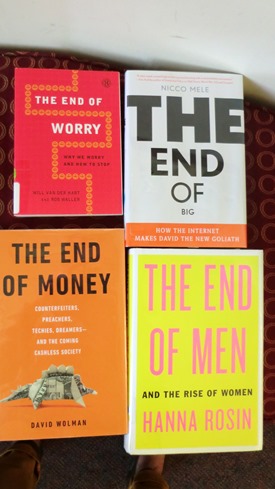 With the release of James K. Galbraith’s The End of Normal next year, we’ll have a titleclone twofer: “The End of X” and “Normal.” I can imagine Amazon recommending to buyers of Galbraith’s book that they also spring for The End of Normal: A Wife’s Anguish, a Widow’s Comeback, by Stephanie Madoff Mack (yes, those Madoffs).

Posted at 06:17 AM in Books, Redundancy, Titles, Trends | Permalink

The first "End of X" book I remember reading was Damian Thompson's "The End of Time: Faith and Fear in the Shadow of the Millennium" (1997). It seemed apt for the era, and since then I've noticed various other end-of-Xs on my shelf (e.g., cinema, faith, suffering, English as a foreign language).

I don't think we'll be seeing the End of This Trope any time soon. Things are always waxing and waning enough to make a case for the end (or dawn) of something or other.

I like your linguistic approach to book titles, however, marketing studies would have something interesting to say about it too. I'm guessing that the popular titles were dictated by the people's attention which maybe at present is caught easily by "ending something..." whatever it might be. As a military linguist I'm seeing instances of carefully chosen vocabulary to sell the most cruel acts or ideas. I'm fascinated by the choice of vocabulary and plethora of military euphemisms. Somehow I believe you know what I'm talking about and that you share this flair.