It’s Portmanteauber! But first, let’s welcome the return of the Name of the Year Tournament, “a celebration of unconventional names and the people who wear them.” After a 30-year run, NOTY’s originators stepped down in 2012; the tournament is now run “by two recent graduates of a university near Chicago” with “boring names” who are carrying on the tradition under a new URL. This year’s brackets include Hurricane Weathers, Fancy English, and Leila Bossy-Nobs. Go forth and vote!

“One of my biggest language pet peeves is the phrase ‘That’s not a word’,” writes James Callan, a content strategist and linguistics aficionado in Seattle. So he launched the Nixicon “to find and retweet people on Twitter who claimed that something isn’t a word.” In less than a week he’d discovered and circulated more than 200 “not a word” tweets.

A few days after starting this, one thing is clear: people really hate irregardless, ain't, and mines.

As for the Nixicon name, James says it’s “a portmanteau of ‘nix’ (meaning ‘no’) and ‘lexicon’.”

Speaking of non-words and portmanteaus, in May 2012 a group of lexicographers, poets, and authors coined “phubbing”—a portmanteau of “phone” and “snubbing”—to describe “the phenomenon of ignoring people in front of you in favor of paying attention to your phone,” according to an article in Advertising Age. Since then, the ad agency McCann Melbourne has been seeding the word—on Facebook and the StopPhubbing website, among other platforms—as a way to create interest in, and sell more copies of, a new edition of Australia’s Macquarie Dictionary. The Wordability blog (which slightly misrepresents the word’s origin) calls phubbing “the best new word of the year” and says the word’s rise demonstrates “all that is good about modern word formation.”

Watch Macquairie’s video about the birth and spread of “phubbing.”

Why do some invented words—gobbledygook, blurb, and smog, for example—catch on? Ralph Keyes writes in The American Scholar that “need and usefulness” and the ability to “capture a widespread sensibility” are key indicators. So is playfulness: “A remarkable number of terms we use today originated in the speech bubbles and captions of cartoonists,” Keyes observes.

In a couple of months we’ll be placing our bets on the 2013 word of the year. Allan Metcalf, author of many books on language (including the definitive history of “OK”) and the executive secretary of the American Dialect Society, makes the case for “Obamacare” as this year’s leading candidate. (My own money, as of this moment, is on “shutdown.”)

My friend Suzanne Mantell, a writer, editor, and rare-book dealer, has written a lovely defense of old-school reading matter: “Real Books and Why We Love Them.”

Another friend, Mike Madrid, has published a new book: Divas, Dames & Daredevils: Lost Heroines of Golden Age Comics. (Mike also wrote The Supergirls: Fashion, Feminism, Fantasy, and the History of Comic Book Heroines.) An illustrated excerpt from the new book—“10 Most Badass Comic Book Heroines”—is up at Huffington Post. I’m loving the name of these nearly forgotten supergals: Jill Trent, Science Sleuth! Madame Strange! Betty Bates, Lady-at-Law! And how did they get away with “Pussy Katnip”?

There were plenty of snorts and snickers in my Twitter timeline over Fukuppy, the name of Fukushima Industries Corporation’s new egg-shaped mascot. But as Victor Mair, Language Log’s Asian-language expert, explains: “Fukuppy is actually a very nice name for a mascot in Japanese.” 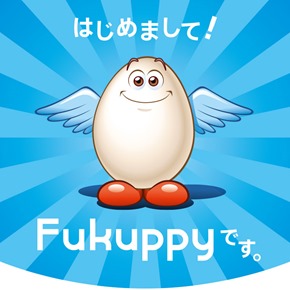 Thirty days hath Septaper? In Word Routes, Ben Zimmer looks at “the financial word of the moment,” taper, and how it gave rise to the portmanteaus Septaper (a gradual slowdown of bond-buying in September) and Octaper (ditto, for October). “September through December seem to lend themselves to creative blending,” Ben writes, “perhaps because the names form a prosodic pattern: each is a three-syllable sequence with a stressed middle syllable (i.e., an amphibrach) and ends in -er.” My own “portmonthteau” sightings include Socktober, Sharktober, OAKtober (celebrating the Oakland A’s), and Archtober (pronounced, perplexingly, ark-tober). (And see my 2012 post on X-toberfest.)

Cronut, shmonut: Earlier this month Starbucks UK introduced a doughnut-muffin hybrid it dubbed the Duffin. Just one little problem with that: a small British bakery chain, Bea’s of Bloombury, has been selling its own “duffin” since at least 2011. (That last link includes a list of several other pastry portmanteaus, including the townie, the crookie, the fauxnut, and the muffle.) Alas, proprietor Bea Vo never troubled with trademark protection. As it happens, Bea’s coinage wasn’t original, either: Barry Popik, a historian of food terms, has found print citations for “duffin” going back to 2007.

And speaking of food portmanteaus:

Did no one @BurgerKing say #satisfries out loud and know it sounds like "Saddest Fries"?

I prefer "nocializing" to "phubbing" because a) it's easier to intuit what it means; b) it covers the whole spectrum of anti-social behavior while using devices, not just phones.

"duffin" sounds like an old form of currency Eliza Doolittle's father would've used down the pub.