« The five types of names (or, Why suggestive beats descriptive) | Main | Word of the Week: Slow-Rolling »

Negative Names with a Positive Twist

Many naming briefs stipulate that “negative words” be avoided. To be sure, there’s a risk to going negative with your company or product name. But sometimes the risk pays off. Consider Virgin: doesn’t the name suggest pilots with no experience? Or Caterpillar: huge machines and engines named for a tiny, destructive insect—seriously? Or Banana Republic: a small, politically unstable country governed by a dictator and dominated by a foreign interest? Yet each of those brands is dominant in its industry. 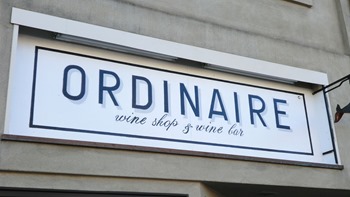 This sign for this new wine shop and wine bar on Oakland’s Grand Avenue catches your attention with a word that seems meh. But is it really ordinary? Not exactly. “Ordinaire” has a specific meaning in wine lingo: vin ordinaire is inexpensive wine for everyday use. What seems negative at first is in fact enticing and relevant.

Speaking of meh, the definition of “mediocre” is “middling” or “average.” (The Latin and Greek roots of the word translate to “halfway up the mountain.”) 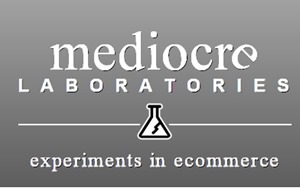 But Mediocre Laboratories is anything but ordinary. There’s the clever logo, for starters, with its tilted E and cracked beaker. There are the ringing quotations about mediocrity. (“A mediocre idea that generates enthusiasm will go further than a great idea that inspires no one.” — Mary Kay Ash.) There’s the “careers” heading: “Be a Mediocre employee. We’re looking for people so good they don’t need to call themselves ninjas, gurus, or rockstars.”

Mediocre was founded by Matt Rutledge, who sold his previous company, Woot, to Amazon. “We really tried to lower expectations with the brand,” Rutledge told TechCrunch reporter Ryan Lawler. “The team drew inspiration from Ev Williams and Biz Stone’s Obvious Corporation,” Lawler reports, “but since ‘obvious’ was taken, they decided to set the bar low with ‘mediocre’ instead.”

In keeping with the laboratory theme, each Mediocre e-commerce “experiment” is code-named for a dead scientist—Libet, Frisch, Wöhler, Pavlov, and Jensen. (I’m guessing about the last one, but it seems like a reasonable conjecture.) 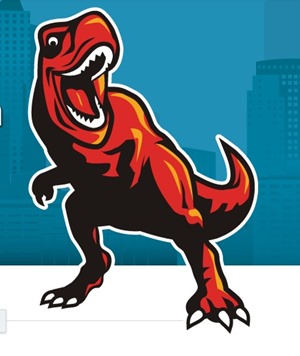 T-Rex here serves as a reminder that “terrible” didn’t always mean “bad”; it originally meant “awe-inspiring” or, yes, awesome. (From Terrible’s Twitter bio: “We build terribly awesome web & mobile web apps with Ruby on Rails, RubyMotion, and other stuff.”) You might also associate Terrible with enfant terrible, an outrageous or shocking person.

Terrible Labs does a terrific job—see early definitions of terrific—of grabbing our attention and making the right conceptual connection. I’d like to see better follow-through in the web content, which is tame and predictable. (“Passionate about creating great products” … “We help our clients turn great ideas into great products” … and many more instances of “we help,” which doesn’t sound T-Rexy at all.) I do like the Terrible Labs blog tagline, “Because Terrible Labs loves you,” and I can’t help admiring the name of one of Terrible’s team members, Trapper Markelz. Trapper!