The Days of the Dead come to their inevitable end (boo!) with a quick survey of deathly branding. 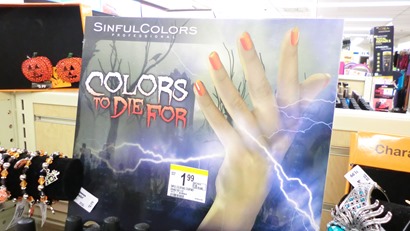 The floor display for Sinful Colors’ “To Die For” Halloween collection, at Walgreen’s, features a disembodied hand that appears to be on the verge of reanimation. The polish-color names themselves don’t quite measure up, deathworthiness-wise, unless there’s something I’m missing in Unicorn, My Turn, and Over It. Of course, if you think about it long enough, you start to see morbid overtones in all of those names.

Is that ominous-sounding, be-umlautted word an IKEA product or a death metal band name? Take the IKEA or Death quiz and test your powers of discrimination (or obsession).

The quiz was created by Pittsburgh ad agency Gatesman+Dave. Not only did I do pretty well (15 out of 20), but I also learned that there is a sub-genre of death metal called Pure Depressive Black Funeral Doom Metal. Unless that guy made it up.

(Via AdFreak. For extra credit, see my 2007 post on the IKEA naming system.)

Ever wonder why video-game characters die the way the do? It all started in 1983, Drew Mackie writes in “Three-Dimensional Death in a Two-Dimensional World,” when Nintendo’s Mario Bros. made its debut. In the game, Drew writes, Mario “leapt to his death, more or less. It’s weird when you think about what you’re actually seeing: In a game where Mario spent the whole time either facing left or right and scurrying along a two-dimensional plane, he died by facing the screen and jumping off the platform, toward the screen.” 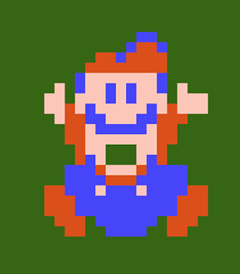 Mario death leap via Back of the Cereal Box.

The death leap caught on:

[I]t ended up everywhere in video games from that era — mostly Mario-style platformers, of which there were many, but some other genres too. Your character died, and he or she looked at directly at the screen — at you, effectively — before they spasmed and leapt into oblivion. It’s like they were saying, “Hey. Fuck you. You killed me.” And then the leap. It seems strange, given that it adds a z-axis into a world that often only had an x and a y previously. But that’s how it happened.

Happy Halloween, and stay away from the turtles.