Word of the Week: Manicule 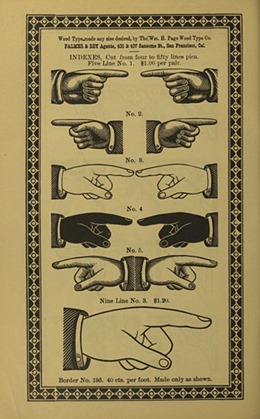 Manicules (“indexes” here) from a book of type specimens published in San Francisco in 1887. Via Feuilleton.

Keith Houston, the author of the Shady Characters blog and of a new book, Shady Characters: The Secret Life of Punctuation, Symbols & Other Typographical Marks, wrote about the manicule in a recent post for the New Yorker’s Page-Turner blog:

In his 2005 essay “Towards a History of the Manicule,” Professor William H. Sherman—the sole historian of this idiosyncratic mark—wrote that, between at least the twelfth and eighteenth centuries, the manicule was possibly “the most common symbol produced both for and by readers in the margins of manuscripts and printed books.” First recorded in the “Domesday Book” of 1086, the manicule—taken from the Latinmaniculum, or “little hand”—was a mark that readers drew to call out points of interest. For the next several hundred years, scholars marked up the margins of their classical texts, law manuals, and notebooks with manicules drawn in a wide variety of styles. But, as was the case with many other marks, the arrival of printing in the fifteenth century triggered a crisis for the manicule: with printed versions of the symbol—and of other reference marks such as * and †—now available to writers, “authorized” notes began to spring up in the margins, encroaching upon the space once available to the reader. The printed ☞—sometimes called a “mutton fist” in Old English slang—overtook its handwritten counterpart, and was overtaken in turn by the numbered footnote. Today, the manicule is used only rarely in printed works, often to lend texts a vintage flavor, but it still appears on the returned-to-sender stamps of the United States Postal Service.

The manicule’s digital descendant is the pointing hand that appears your computer screen when you place your cursor over an web image or HTML link.

Read the rest of the Houston’s article to learn about the hashtag,  ampersand, pilcrow, and diple. (I wrote about the hashtag—aka octothorpe—and the pilcrow in previous WotW posts.) And read a review of Shady Characters in the Visual Thesaurus.

More: See a large set of manicules from various decades, uploaded by Nick Sherman, Depression Press, and other contributors. There’s also a manicule group on Flickr.

Posted at 07:20 AM in Punctuation, Typeface, Word of the Week | Permalink