Word of the Week: Chirality

Chirality: In science, the property of asymmetry, or “handedness” (chirality comes from Greek kheir, “hand”), that determines that a three-dimensional form cannot be superimposed upon its mirror image. Pronounced k

The noun chirality and the adjective chiral were coined in 1894 by the Scottish mathematician and physicist Sir William Thomson, Lord Kelvin, for whom the absolute temperature scale is named.* “I call any geometrical figure, or group of points, chiral, and say that it has chirality, if its image in a plane mirror, ideally realized, cannot be brought to coincide with itself,” Kelvin wrote.

Chirality is a running theme in “Breaking Bad,” the television series about a chemistry teacher in Albuquerque, New Mexico, who becomes a methamphetamine cook and drug-empire builder, that ended its five-season run last night. In Season 1, Episode 2, protagonist Walter White, played by Bryan Cranston, describes chirality to his high-school chemistry students. Although mirror-image molecular forms “may look the same,” he explains, “they don’t always behave the same.” He gives the example of thalidomide, a drug given to pregnant women in the 1950s: the right-handed isomer “a perfectly fine, good medicine,” while the left-handed isomer can cause “horrible birth defects.”

Chirality operates as a metaphor throughout “Breaking Bad.” In the series many characters, including Walt himself, exhibit flip sides to their personalities. White, for example, takes the nom de crime “Heisenberg” in implicit homage to the Nobel Prize-winning physicist Werner Heisenberg,** who defined the Uncertainty Principle (“The position and momentum of a particle cannot be simultaneously measured with arbitrarily high precision”). As Heisenberg, White transforms into a powerful scientist—and a monster. 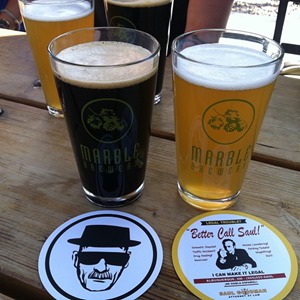 The science of “Breaking Bad” has been discussed with great enthusiasm in the scientific and popular media. (The series’ creator, Vince Gilligan, told the science-and-entertainment blog ScriptPhD that several scientists served as consultants to the production.) For more about the concept of chirality, see “Chirality Beyond Breaking Bad” in Science 2.0 and “Handedness and the One Who Knocks” in Heisenberg’s Chemistry. For more about the special effects used on the show, see “Breaking Bad” in Chemical & Engineering News. And for more about Walter White and the real Heisenberg, see “Who Is the Real Heisenberg?” in Bad Ass Digest.

For definitions of some other words used in the series—including the term “breaking bad” itself—see Wordnik’s posts about Season 5: first half and second half.

Also see TV Tropes for a list of tropes used in the series, from Abandoned Area to Your Mom. Although comprehensive, the list does not include “chirality.”

* Lord Kelvin also famously proclaimed, in 1900: “There is nothing new to be discovered in physics now. All that remains is more and more precise measurement.” Five years later, Albert Einstein published his theory of special relativity.

** “Heisenberg” is just one of many German names used in the series. For more about them, see “The Intriguing German Connections in Breaking Bad,” in Spy District, a blog of cultural criticism.

Posted at 08:04 AM in Beer, German, Greek, Science, Television, Word of the Week | Permalink

In the '70s or early '80s, NASA discussed handedness in terms of alien life -- if there were viruses and other forms of life on Mars, they might be incompatible with our biology by reason of being left-handed. One NASA scientist quickly took out a patent for left-handed sugar. It would have to be created in a lab, but its inability to interact with the human digestive system means it would sweeten foods without producing weight gains or rotting teeth.