Word of the Week: BYOD

BYOD: Initialism for Bring Your Own Device, a corporate policy that encourages or requires employees to bring their own mobile devices to the workplace and to use them to access company information. Also used in educational settings. Sometimes known as BYOT (Bring Your Own Technology), BYOP (Bring Your Own Phone), and BYOPC (Bring Your Own PC), but BYOD appears to be becoming the standard usage.

According to a Wikipedia entry, “Bring Your Own Device” and “BYOD” first appeared in print in a 2004 paper by British, German, and Swiss researchers investigating “serendipitous interaction with large public displays.” Intel began using BYOD in its current workplace sense in 2009, and it gained currency in early 2011 (according, again, to Wikipedia), “when IT services provider Unisys and software vendors VMware and Citrix Systems started to share their perceptions of this emergent trend.”

Less than three years later, the initialism is well accepted enough to be used without definition by Lookout, Cisco, and other companies cashing in on the challenges posed by the BYOD workplace. 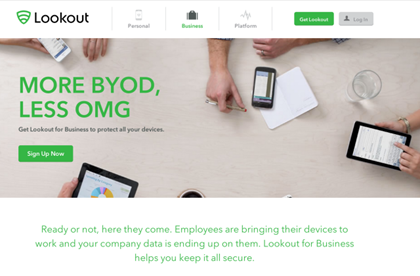 Lookout screen shot via TechCrunch. For more on OMG in branding, see my July 2012 post and a recent follow-up.

“BYOD” is becoming a noun—the name of the policy—rather than a modifier. In February 2013, ZDNet published a series of articles on “BYOD and the consumerization of IT.” One article predicted that by the end of 2013, 62 percent of companies would “allow BYOD.”

“BYO” to mean “bring your own” is a creature of the Prohibition era, according to Barry Popik, author of the language-and-history blog The Big Apple:

“BYOL” is cited from 1919 and “BYOB” from 1924. A 1919 “BYOL” citation references Prohibition regulations. A 1924 “BYOL” citation indicates that the term was used on ocean liners leaving New York City; under then-new rules on British ships, liquor would not be served by the ship until it was outside the twelve-mile jurisdiction of the United States, but passengers could bring their own (“BYOL”).

After Repeal in 1933, “BYOB” was recycled for use in private party invitations; the second B could stand for booze, bottle, or beer. The OED’s earliest citation for this usage is a 1959 article in the scholarly journal American Speech, which suggests it had already been circulating for some unspecified time.

“BYO” lends itself to spinoffs, as in a humor piece by F.P. Tullius (possibly a pseudonym; my research hit a wall) in the May 26, 1975, issue of the New Yorker (paywalled), in which a has-been Hollywood writer pens a note to a successful producer:

Seems like every other week I see you mentioned in Haber, at one of her Super-A parties. … As for me, marooned in this little town just north of Mendocino, the best I can make is what I call our Triple-B Group. Our parties are not just BYOB but also BYOW (Weed) and BYOBR (Brown Rice).

(“Haber” is Joyce Haber, a powerful Hollywood gossip columnist of the 1970s and 1980s; she died in 1993. “Super-A” refers to “A-list,” which has meant “the most celebrated or sought-after people” since at least 1935, when it was used in connection with debutantes.)

Posted at 07:29 AM in Acronyms, Buzzwords, History, Technology, Word of the Week | Permalink

I first encountered BYOB in 1990s New Zealand where you could bring your own bottle (of wine) to unlicensed restaurants, i.e. those not having a licence to sell liquor/alcoholic beverages.