« On the Visual Thesaurus: Hero Worship | Main | Punctuate That Name! »

909er: A resident of Southern California’s Inland Empire, classified by the U.S. Census Bureau as the Riverside-San Bernardino-Ontario metropolitan area. The numeral refers to one of the region’s area codes; in 2004, the western part of Riverside County was split off and assigned a new area code, 951. 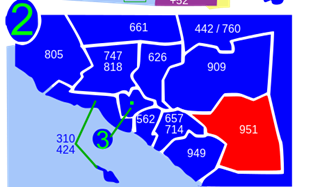 For years, a stubborn divide between youth in Orange County's beach communities and those who visit from the inland has been summed up in the term ‘909ers,’ a less-than-flattering reference to an Inland Empire area code that — in beach slang — has come to mean anybody east of the county line.

Its popularity has waxed and waned but resurfaced with a vengeance in the aftermath of the U.S. Open of Surfing in Huntington Beach in July.

When the weeklong event ended in a chaotic night of broken windows, street fights and a mess of tossed food, word that 909ers were to blame spread quickly among locals, despite the fact that only three of the 12 adults arrested were from the Inland Empire. The rest were from Orange County, San Gabriel Valley and Ventura.

The 909 area code was created in 1992 and “quickly gained a negative reputation,” according to the Times’s Paloma Esquivel: “ ‘The 909’ was used on TV shows and by comedians as shorthand for a low-class community.”

Area-code shorthand is popular in Southern California and can mystify outsiders. Times reporter Esquivel interviewed one 43-year-old man who hadn’t quite assimilated:

He said he moved to Huntington Beach from Las Vegas and was perplexed by the way locals use ‘909ers.’

“Area codes — I’m new to that,” he said. “It’s so weird in California you’re defined by the area code you’re from. It’s ridiculous.”

The earliest Urban Dictionary citation for “909er” is from 2003; it says, succinctly: “trashy riverside [sic] people.” Other Urban Dictionary definitions include “white trash,” “hayseeds,” and “worthless idiots, pure and simple.” As with many terms originally intended as slurs, the “909er” label can also be worn with pride, as in this UD counter-definition: “A Term Used By Snobby Little White Kids To Describe Us Good Ghetto Folk.”

Numerical-code branding has been used to more positive effect in Chicago, which earlier this year renamed a public walkway “The 606,” from the first three digits of  Chicago’s ZIP codes. [Thanks to commenter David for the correction.]

Similar in sound but unrelated etymologically to “909er” (although in some cases there may be overlap): “99ers”—people who have exhausted their 99 weeks of unemployment benefits.

Posted at 07:40 AM in Naming, Nicknames, Numbers, Word of the Week | Permalink

606 would be the first three digits of Chicago ZIP codes. The area code 606 is in Kentucky.

I got excited because I thought you might go into a riff on 808s. http://www.urbandictionary.com/define.php?term=808&defid=719992.

And there are a lot of references to “The 808 thump” in infectious dance music http://www.azlyrics.com/lyrics/blackeyedpeas/boomboompow.html

Anyway. That’s the kind of knowledge I’m good for. Not the usable kind.

Funny, on the tv show Veronica Mars, the douchey rich kids were called "09ers" because they came from the (fictional) ZIP code 90909.

You might find "905er" interesting too. About 20 years ago, Toronto area codes split into those belonging to Toronto proper (which kept the original 416 code) and its suburbs/exurbs/bedroom communities (905). "905" eventually became shorthand for car-loving suburbanites who were politically at odds with the people living in the inner city. When the transit-hostile Rob Ford became mayor a few years ago, there was a lot of talk in the news about the 905 contingent bringing him into power, and thanks to urban sprawl, the 416/905 battle is more heated than it ever was.

I'm not really sure how to Google this, but Wikipedia and Urbandictionary both have a bit to say about it: