« Names of Interest | Main | End of the Line for Yahoo Hoopla »

It was K’s turn in the rotation, and Google—which since 2009 has given every Android release the code name* of a generic confection, in alphabetical order—had announced that Android 4.4 would be called “Key Lime Pie.” (The previous release was Jelly Bean.) But yesterday the company pulled a switcheroo, revealing that the next release would for the first time bear the name of a branded treat, the Kit Kat bar. For reasons known only to the Don’t Be Evil Empire, Google is spelling it “KitKat.”

Stranger still, no money is changing hands between Google and Nestlé, which acquired the Kit Kit brand in 1988 through its purchase of Rowntree, the British company that introduced “Kit Cat” boxed chocolates in the 1920s. (The spelling was changed to “Kit Kat” in 1937.) In the United States, the Hershey Company has had a license to manufacture Kit Kat bars since 1970.

John Lagerling, Google’s director of global partnerships, told the BBC that the decision to switch from “Key Lime Pie” to “KitKat” was made in late 2012:

“We realised that very few people actually know the taste of a key lime pie,” he explained.

“One of the snacks that we keep in our kitchen for late-night coding are KitKats. And someone said: ‘Hey, why don't we call the release KitKat?’

“We didn’t even know which company controlled the name, and we thought that [the choice] would be difficult. But then we thought well why not, and we decided to reach out to the Nestle folks.”

According to a couple of TechCrunch reports, the licensing deal “seems to go deeper than just a name”:

Nestle has already kicked off a bizarre cross-promotion strategy that will bestow Nexus 7s and Google Play credits on those who find specially branded Kit Kat candy bars emblazoned with the Android logo, à la Willy Wonka. Yes, this is really happening. Apparently the agreement was finalized behind closed doors at this year’s Mobile World Congress in Barcelona, and all parties involved amazingly managed to keep the name under wraps (I slay me) for six months despite the fact that Nestle has been churning out that Android-laden packaging for 50 million candy bars.

The promotion, which begins September 6, will run in the U.S. and the U.K. In anticipation, the Android website depicts a Kit Kat bar and a chocolate robot. The Kit Kat website is a playful spoof of technology layout and lingo: 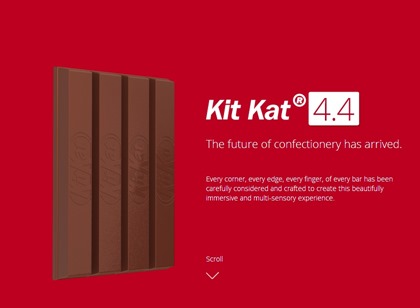 “Kit Kat 4.4: The future of confectionery has arrived.”

A few things you may not know about Kit Kat, gleaned mostly from Wikipedia:

And something you may not have known about Google: Today, September 4, is the 15th anniversary of the company’s incorporation.

* It’s not really a code name if you tell the whole world, is it?

"We realised that very few people actually know the taste of a key lime pie."

@Jonathon, on a global level the name wouldn't work at all. Any positive connotation would be lost on most non-native speakers, who might also wonder what a key has got to do with a confection anyway.

What an interesting combination! I like kit kat so much better than key lime pie anyway!

There's a real KitKatClub in Berlin now too, surely named after the one in Cabaret

You probably can't approve this comment; but this is the first I've heard of an association between Google and Nestlé; and even though Google has recently been shown to be dabbling in "evil" in some areas, Nestlé - as we are often reminded [and which I've been boycotting for decades] "kills babies" [by promoting the sale of its infant formula in countries where water is unsafe, &c.] and also recently went on record as believing that water should be proprietary, privatized, &c.
So: a very bad bedmate for a company trying to do no evil.