Today, September 24, is National Punctuation Day, a holiday I’ve happily ignored since 2009. This year, however, I’m getting into the spirit and celebrating with a clutch of brand names that wear their punctuation on their sleeves, so to speak. I’ve already written about SIX:02, the new “concept store” from Lady Foot Locker with a colon in its name. Here are five additional punctuation-mark names.

Han:dle is a “priority engine” that “allows you to capture ideas, triage your inbox, plan a schedule for the day and focus on your priorities,” according to a TechCrunch review from April 2013. I don’t know what the colon is supposed to signify—maybe it’s nothing more than a vertically oriented gratuitous umlaut—and apparently neither do the company’s founders, because it can’t be found anywhere but in the logo. Elsewhere, the company and app are simply “Handle.”

FYI, trademark law takes a dim view of a company name used as a verb (“It’s your life. Handle it”). That sort of thing indicates that your name is merely descriptive (bad, from a legal standpoint) rather than suggestive (good).

There are Magnum Gold Collection condoms, which require no punctuation, and then there is the Magnum Gold?! ice cream bar, which seems to say “Really?!” and also “We wish this font included a real interrobang so we didn’t have to use this ridiculous double punctuation mark.” (Via The Impulsive Buy.) From the website: “Silky vanilla bean ice cream swirled with sea salt caramel and covered in a golden coating made with Belgian Milk Chocolate.”

There are also Magnum Mini Gold?! bars, which have all the confusion—er, pleasure—in a smaller serving.

Speaking of interrobangs, The Interrobang is an online news and entertainment publication (“It’s the questions that matter”) that does not use an interrobang in its logo. It does, however use “cool shit” in its self-description. 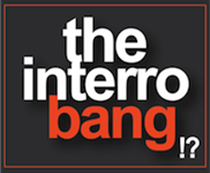 In the getting-it-right column is Novant Health, a healthcare network headquartered in Winston-Salem, North Carolina. The new logo makes clever use of negative space.

Then there’s Apostrophe, an elegant new quarterly publication (online only) from Lands’ End, the Wisconsin clothing retailer with the conspicuously mispunctuated name. Talk about making lemonade from lemons:

Perhaps you’ve noticed a (not so) minor punctuation error in our name, Lands’ End – the apostrophe is in the wrong place. Our very first catalog was misprinted and at the time we didn’t have the money to fix it. Though it started as a mistake, we quickly learned to accept it, to celebrate it even. It showed that it didn’t take ourselves too seriously, that we could embrace happy accidents and make the most of them, that we’re human. That sentiment is as true today as it was then, so we bring you our newest endeavor with a nod to our irreverent past.

On second thought, why not just kill the apostrophe? Writing for The Week, James Harbeck—a linguistics-trained editor with a wry sense of humor—asserts that “we would all be better off without it.” And he drives home the point by following his own suggestion.

I bet the colon on HAN:DLE is there to look like the "very happy" emoticon: :D
It's used as an icon on their website.

I've never really seen a pressing need for the interrobang; as far as I'm concerned, anything I'd want to use it for is adequately covered by ?! or !? (with the possibility of a subtle distinction between the two of them, as in chess annotations: http://en.wikipedia.org/wiki/Chess_annotation_symbols#.3F.21_.28Dubious_move.29). But I absolutely cannot imagine why a Web site calling itself "The Interrobang" would use !? rather than ‽ in its logo. What's up with that⁈