Earlier this week I looked at three number-names: KFC eleven, Portland’5, and 961 Beer. Here are four additional examples, all from the world of fashion and retail.

9|15 is one of Saks Fifth Avenue’s private-label brands of women’s apparel. Introduced in 2012, it’s named for the retailer’s September 15 “birthday,” which happens to fall during New York’s Fashion Week, aka Mercedes-Benz Fashion Week. 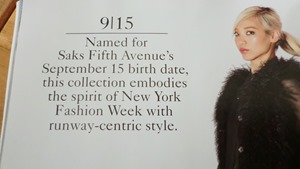 When Barack Obama secured the Democratic nomination in 2008, Michelle Obama was wearing a dress by one of her favorite designers, Maria Pinto. Pinto’s business got a temporary boost after the election, when Mrs. Obama was frequently photographed wearing Pinto’s creations, but in 2010 Pinto closed her eponymous business and filed for bankruptcy. Now she’s back in very 2013-style fashion, launching a new, moderately priced line with a Kickstarter campaign. The line’s name, M2057, encodes a story, according to the New York Times fashion blog, Runway:

She’s a determined businesswoman and also an optimist: the 2057 in the name of the collection is the year she expects to turn 100.

The M is, presumably, for Maria.

You’d be forgiven for thinking that the “article” in Article 23, an online apparel company, refers to “article of clothing.” But the founders had a different article in mind, as they explain at some length on their About Us page:

Article 23 aims to offer customers with high quality fashionable apparel which is produced ethically and sustainably by verifying and maintaining supply chain transparency to ensure minimal environmental impacts and maximum social equality. Our name and social mission are derived from Article 23 of the UN Universal Declaration of Human Rights, which states that:

Athletic retailer Foot Locker’s spinoff, SIX:02, launched in late 2012 with three stores that “offer women a broad choice of athletic brands in an environment created especially for her [sic].” The company is hoping that the new concept revitalizes its Lady Foot Locker brand, which, according to the Wall Street Journal, “has been the worst performer among the company's domestic concepts.” (The horrible “Lady Foot Locker” name doesn’t help.)

According to a blog post from Chute Gerdeman, the Columbus, Ohio, agency that designed the new stores, “SIX:02” is a time stamp:

Tick, tock…what time is it? Did the alarm just go off to signal the start of a new day? Or maybe it's quitting time at work and the next stop is the gym before meeting up with friends for dinner. Whether the day is just getting started or winding to a close, the young, active woman that shops at Six:02, launched by Lady Foot Locker, will make every minute count.

The clock-face logo and neon colon look sharp and modern, but I can foresee some Abbott-and-Costello moments when one shopper tells another to “meet me at 6:02.”

Posted at 07:17 AM in Fashion, Naming, Numbers, Punctuation, Retail | Permalink