Today is International Talk Like a Pirate Day (the 13th annual, by my reckoning), and to mark the occasion I’ve gone on a treasure hunt for pirate-type brands. I’m not dropping a dime on actual piratical deeds, you understand: this is just good clean yo-ho-ho-and-a-bottle-of-rum fun.

Yarrly has pirate-talk in its very name. Let TechCrunch explain:

[W]hat the world really needs, of course, is an anonymous meme generator with a chain letter-styled remixable twist. Meet Yarrly (to be said with your best pirate voice). Created by London-based Dave Ganly and Holly Clarke outside of their tech day jobs, the Android app lets anyone create two panel images and add text in the style of a meme maker.

Yarrly has some fun with the piracy theme. 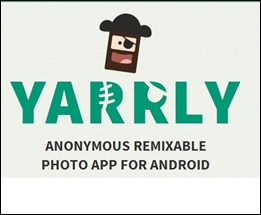 Aye, matey—it’s another Name That Ends in -Ly!

But here’s the part the makes branding consultants and trademark lawyers want to walk the plank: each Yarrly remix is called a “yarrly” – lower case. Bad, bad branding!

Yarr, Pirate Maps is “just like usin’ real google maps, but better – ’cos everythin’ is all piratey and mappy.” Example: when you mouse over a map, the manicule is a skeleton hand. Yarr, Pirate Maps, is not related to Yarrly, as far as I can tell.

Scurvy was the scourge of real pirates—the bleeding gums, the jaundice, the suppurating wounds—but apparently Sanuk, a Southern California footwear company, likes the sound of “Scurvy” for a men’s casual shoe.*

Sanuk Scurvy in “brindle” color, on sale at REI.

* They look like shoes to me, but Sanuk says otherwise:

The company name comes from the Thai word for “happiness.”

I learned of the Scurvy from Jan Freeman, who queried me in an email: “Do you suppose they think ‘scurvy’ is just a pirate word (‘ye scurvy dog’) and have no idea it's a disease?” Actually, Sanuk seems to know exactly what it’s doing. Here’s the product copy on Amazon (probably supplied by the manufacturer):

With a name like Scurvy, it’s got to be good!** In fact, this sidewalk surfer from Sanuk is the epitome of wholesomeness, crafted with vegan sensibilities. With a hand-crafted canvas upper and a “laces or no laces” option it’s like two shoes in one. Inside, a soft canvas liner a contoured footbed makes this shoe a nice place for your foot to be. And down below matey? A herringbone rubber outsole ensures you won't slip while walking the plank.

Still, severe vitamin C deficiency is no joke. I picture the Scurvy being worn by Bleeding Gums Murphy, R.I.P.

** A scurvy act of piracy! That “With a name like__” slogan was originally coined by Smucker’s and, of course, parodied by Saturday Night Live in the famous “Jam Hawkers” skit.

I must add my son's business to your list
Pirate Crew - Technical Crew Services
www.piratecrew.co.uk/‎
The Pirate Crew are a leading supplier of backstage personnel to Theatre, Entertainment and Corporate Events industries