« Word of the Week: Fatberg | Main | All -Ass Intensification Is Not Created Equal »

Like much of writer/actor Larry David’s oeuvre (“Curb Your Enthusiasm,” Sour Grapes), the HBO original film Clear History, which premiered on August 10, is a comedy about envy, resentment, and failure. But what sets Clear History’s plot in motion is something else: a product name.

The film’s opening scenes are set in Silicon Valley in 2003. Will Haney (Mad Men’s Jon Hamm), founder of Electron Motors, is introducing his employees to a breakthrough invention: an electric car that’s better than anything else on the road.

“I know what you’re asking,” says Haney. “What are we going to call this bold new vision?” Ta-da: the Howard. 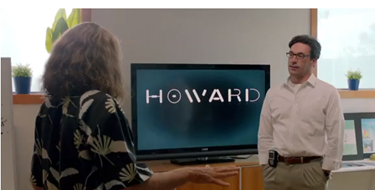 The Howard is named after Haney’s literary hero, Howard Roark, protagonist of Ayn Rand’s libertarian doorstopper The Fountainhead. (Haney has also named his only child Howard.)

The Howard? That’s what we’re calling it? Nobody’s gonna buy a car named Howard! Call it a Dewey! That’s a good name! Call it Duncan!

By the end of the scene, Flomm has quit Electron Motors and given up his 10 percent stake in the company. Over the next decade the Howard becomes—you guessed it—a huge success, and Flomm, who has moved to Martha’s Vineyard, shorn his locks, and changed his name to Rolly DaVore, is scraping by with odd jobs instead living it up as a billionaire. (As the New York Times’s Alessandra Stanley pointed out, “Nathan Flomm” sounds like “Ethan Frome” and “Rolly” is an inversion of “Larry.” Not for nothing, “DaVore” is pretty close to “David.”) When Will Haney shows up on the island with a gorgeous new wife, Rolly/Nathan begins plotting his revenge.

Besides the Fountainhead reference—a clip from the 1949 film adaptation, starring Gary Cooper, turns up later in Clear History—“Howard” may allude to the Edsel, which was also named for a founder’s scion. The name may also be an inside-Hollywood joke: Howard the Duck, the 1986 live-action comedy produced by George Lucas, among others, is remembered mostly as one of the biggest box-office flops in history.

As for the Howard car itself, the auto blog Jalopnik is not impressed: “[T]he design for the revolutionary car … reveals the stigmas and stereotypes electric cars still have in mainstream society. … Awkward proportions aside, the car feels like a cobbled-together prop as opposed to a fully designed car, and HBO certainly has the resources to do better.” 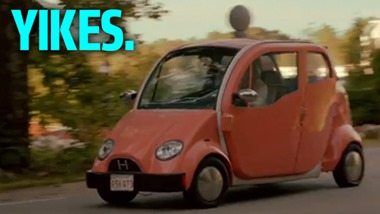 I’m willing to bet the cartoonish design was intentional.