« On the Visual Thesaurus: What Does Classic Mean? | Main | Word of the Week: Gentefication »

“The Man Who Has Stolen the Straw” (Armenian), “Way of the Birds” (Estonian), and other cultures’ names for what we call the Milky Way.  In Sanskrit, the galaxy is called “Mandakini,” which translates to “calm” or “unhurried,” but could also be the name of the latest swimwear sensation. (Via @mashedradish.)

“The Internet is a James Joyce novel”: on the playful language of image macros. 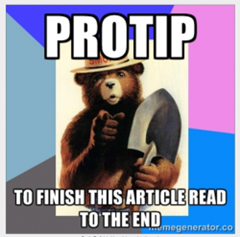 Image macro via The American Scholar.

Love it or loathe it, “impactful” didn’t originate in business jargon or advertising copy. And, as Language Log’s Mark Liberman discovered, its use is decades older than you think.

Alpha-stacking—pushing movie titles to the front of the alphabet—is becoming more common. One independent-studio head says it’s because “Americans are lazy people. They can’t be bothered to go past ‘L’.”

The director Lee Daniels can’t catch a break with his movie titles.

The baby formally known as Prince: Ben Yagoda on the naming customs of the rich and royal. (Plus: “delivered of a son” and “mommy tummy.”)

“Is there anything preventing a company from calling its active ingredient supercurol? Well, yes.” James Harbeck on how prescription drugs get their names.

Did Spotify start the namifying trend? The Name Inspector provides infographic evidence. (See his Pinterest Wall of Namifying, too.)

“That’s a good idea,” “It’s gonna be awesome,” “We should talk,” and other banal phrases that American businesses have trademarked.

The most popular ad campaign in Japan—it’s been running for six years—features “the White family”: mother, daughter, father (a human in a dog’s body), son (a black American), and maid (an alien incarnation of Tommy Lee Jones). Quentin Tarantino and a Japanese astronaut have made cameo appearances. The ads are for SoftBank, a mobile provider;  there are no subtitles, but the surrealism transcends the language barrier. Watch a bunch of the ads here.

People have been literally exploding over non-literal literally. The Visual Thesaurus rounds up the online reactions to the controversy, including this one from the Oxford English Dictionary’s Fiona McPherson: “We literally cannot see what all the fuss is about.”

And that’s it for this month. Literally.

Boy, I sure am glad the Bloomberg article didn't ask any trademark lawyers for insight on the topic of trademark registration of banal phrases. Best not to let facts interfere with misleading the public about the PTO and how trademarks work. At least one of the commenters weighed in with some clarification ...