« How Many Managers Does It Take? | Main | July Linkfest »

Word of the Week: Frissant 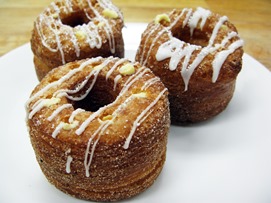 Frissant photo from SwissBakery.ca: “Frissant is Canada’s cronut on the map! No lineups, no scalping. Just come on in!”

Frissants are the latest invention to capitalize on the modified-doughnut frenzy that began in May with the introduction of the cronut—a fried, cream-filled doughnut made of flaky croissant dough—at the eponymous Manhattan bakery of Dominique Ansel. Ansel—who has filed for trademark protection of “cronut”—makes just 300 cronuts a day, and they sell out quickly at $5 each. As Ben Zimmer pointed out in his Boston Globe “The Word” column and in the Visual Thesaurus, early copycats such as doissant and dossant have lacked the lexical punch, and the publicity bonanza, of “cronut.”

“Cronut” has also benefited from its New York City origins (if you can make it there…). “Frissant” may be doomed to provincial obscurity, but I for one applaud the cleverness of the coinage. Not only does it maintain the Frenchiness of “croissant,” but it also suggests frisson – a thrill, a shiver of excitement – a delectable French word imported into English in the 18th century.

For more on the cronut craze, see “Crazy for Cronuts: Picking Apart the Tasty Trend,” which aired Saturday on NPR’s “All Things Considered.” For more food portmanteaus, see my posts on turducken, veggieducken, cherpumple, mockolate, and Edward Gelsthorpe, coiner of Cran-Apple and Manwich.

Posted at 08:00 AM in Canadian, Food and Drink, French, Neologisms, Portmanteaus, Trends, Word of the Week | Permalink

I do appreciate the "frisson" suggestion, but can't help seeing "pissant" - in plain old vulgar English - when I see "frissant."

Also, a trademark rant: You can't create a brand new thing (here, cronut, as discussed), define it, use it as the name of THE THING ITSELF in both singular and plural - and then seek trademark registration for it. The inventor of cookie dough ice cream was not entitled to register COOKIE DOUGH for the name of its ice cream merely because he or she came up with it first. The same goes for the cronut. In fact, Ansel's applications have not matured to registration, and, IMHO, should not. Rant over.